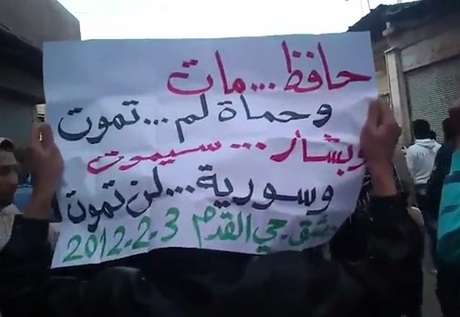 A small group of Syrian Alawites, the same minority sect as President Bashar Assad, urged their community to join the anti-regime revolt in the country, in a statement sent to Agence France Presse on Friday.

"O Alawites all across Syria, enough is enough, so rise in unity against (Assad's) corrupt family whose only goals are treason, money and power," said a statement signed by a new movement calling itself "Free Alawites".

It is the first such initiative in an uprising which was launched by activists from a cross-section of Syrian society but that has come to be dominated by the Sunni Muslim majority.

Alawites are an offshoot of Shiite Islam and estimated to make up about 10 percent of the population.

An Alawite activist and member of the Free Alawites speaking to AFP via the Internet charged that the Assad regime used sectarianism as a tool to try to crush the revolt.

"The regime has worked on building up (sectarianism) for a year and a half," said the activist, who identified himself only as Abu Jabal.

Asked if he feared that victims of regime violence would seek revenge against members of the Alawite sect, Abu Jabal said: "Of course people are angry, we consider that normal. But all this sectarianism will end when the regime falls."

The new movement, which Abu Jabal hopes will grow beyond a tightly-knit group of activists, aims to mobilize poor Alawites against the regime. Most Alawites live in the west of the country and have traditionally lived off the land.

"Agriculture feeds no one any more, there is no government planning or support for this region," said Abu Jabal. "The regime plays the sectarian card, but does not support the Alawites in practice."

they must be salafist alawites according to M8 standards... lol