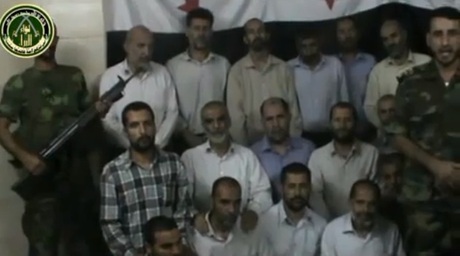 Rebel fighters will execute dozens of Iranians they kidnapped in August unless Syria's army withdraws from the embattled Eastern Ghouta area of Damascus province, a rebel commander said on Friday.

"We also have other secret, military demands. If the regime does not fulfill them we will start finishing off the hostages," warned Abul Wafa.

It is the second time the rebels have issued such a threat against the Iranian hostages.

On August 5, rebels posted a video of 48 Iranians kidnapped in Damascus, charging they were elite Revolutionary Guards.

The next day, a rebel group that claimed responsibility for the kidnapping said three of the men were killed in shelling by government troops.

Al-Baraa Brigade, which has since joined the Revolutionary Military Council of the rebel Free Syrian Army, announced on its Facebook page at the time that it would "execute the prisoners who were proven members of the Revolutionary Guards if the shelling continues."

Tehran has appealed for help to secure the release of the hostages it says were visiting the Sayyida Zeinab shrine, a Shiite pilgrimage site on the southeastern outskirts of Damascus.

Iranian Foreign Minister Ali Akbar Salehi has since said that "retired" members of the Guards and army were among the hostages, the ISNA news agency reported, but denied they were on a military mission.

The international community is divided over the Syrian conflict, with Iran, Russia and China fully backing Assad, and the West, several Gulf countries and Turkey supporting the revolt.

"We are sure the Iranian men are helping the regime" of President Bashar Assad, Abul Wafa said.

"Some of them provide technical assistance to Assad's regime," he added.

For Shiite Muslims, pilgrimage at a time of difficulty such as war is considered all the more holy.

Abul Wafa spoke after rebels issued a video on the Internet on Thursday that shows about 30 hostages in civilian clothes huddled up in rows, with their backs to a wall covered in the flag associated with Syria's revolt.

"These negotiations failed because of the inaction of the Iranian and Syrian regimes," he said.

Once the rebels' ultimatum expires on Saturday, "we will execute one Iranian prisoner for every martyr that falls," he added.

The video was released as the army and rebels engaged in fierce fighting across Eastern Ghouta in Damascus province, a key theater of combat because of its proximity to the capital.

Dozens of civilians have been killed and arbitrarily arrested during army shelling and clashes in the province in recent days, monitors and activists say.

Human rights monitors have accused both the regime and rebels of committing war crimes, including extra-judicial executions.

So what. Fewer terrorists.

Iran must withdraw its support for Assad before time runs out or will go down as a an accessory to murder of Innocents.