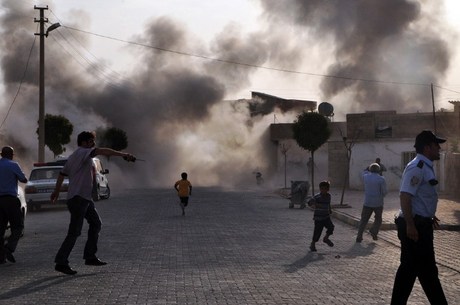 The Syrian shell landed in the Turkish town of Altinozu in Hatay province near the border, triggering an immediate response fire from Turkish forces, at around 1630 GMT.

There were no immediate reports of injuries.

The shells fell near a Syrian military position south of the rebel-held border post at Tal al-Abyad, in the northern province of Raqa, a monitoring group.

Hatay province is opposite the northwestern Syrian province of Idlib, while Raqa is further to the east in the strife-torn country.

Raqa province is home to many thousands of displaced Syrians fleeing violence from other areas of the country, activists say.

The fresh round of fire exchange comes two days after a Syrian shell killed five Turkish nationals in another border town, Akcakale, triggering a Turkish retaliation fire in its immediate aftermath.

Turkey, a member of NATO, preserves its right to hit back if shelling continues, Turkish officials have warned.

Erdogan reiterated that Turkey does not want war but is ready to act if threatened by the regime of President Bashar Assad, which has been at war with rebels since early last year.

"I am calling once more on the Assad regime and its supporters: Don't dare to test Turkey's patience," Erdogan told a large crowd of supporters of his ruling AKP party in Istanbul.

"Turkey will prevail without a scratch out of this incident and proceed on its way. But you will be crushed by it and pay a big price."

Turkey's government has obtained a one-year mandate from parliament authorizing military raids into Syria if necessary.

Erdogan again said Turkey was not interested in war but would not hesitate to retaliate against any attack and violation of its national security.

"We are not war-enthusiasts," said Erdogan, but he stressed that Turkey had waged many wars throughout its history and was "ready to fight for peace".

Wednesday's incident marked the first time Syrian shells have killed Turkish nationals since the uprising against the regime in Damascus began in March 2011.

Counter-battery radar is apparently being used here. It tracks the trajectory of projectiles and calculates their origin, so that fire can be directed at that place. If, say, the Emir of Qatar fired the mortar round that landed in Turkey from a mortar belonging to his brigade of Free Libyan Grad Missile Volunteers, if there were such a group, and if it were trying to drag Turkey into the war, then he might well be hit by the return fire.