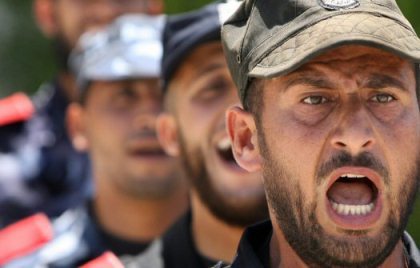 The armed wings of Gaza's ruling Hamas movement and the Islamic Jihad group announced Monday they had fired a series of rockets at Israel, a day after an Israeli air strike that injured 10 people.

"In response to the injury of civilians in the most recent strike on Rafah, the Qassam Brigades and the Al-Quds Brigades fired a number of rockets at enemy military positions," Hamas's Ezzedine al-Qassam Brigades armed wing said.

"This blessed operation came in response to continuous and repeated enemy crimes against our defenseless people."

The remains of "19 rockets were found in the Ofakim area, specifically near the Eshkol regional council. All rockets landed in open areas, and one home was damaged by shrapnel," she said.

In addition, "three rockets were found in the Kerem Shalom area, they caused no injuries or damage," Samri added.

The rocket fire came after an Israeli air strike on the southern Gaza city of Rafah Sunday evening.

The strike targeted two men belonging to a Salafist militant group, the Israeli military said, accusing the men of being involved in planning attacks on Israelis.

The men were critically wounded in the strike, which also injured eight others, including children.

On Monday morning, Ashraf al-Qidra, spokesman for the Hamas health ministry in Gaza, said tank shelling east of the Gaza city of Khan Yunis had injured three people, including one in a serious condition.

A spokeswoman for the Israeli military confirmed that tanks had shelled Gaza.

And the army said that "in response to this morning's rocket barrage at southern Israeli communities, the Israeli army targeted Hamas terror activity sites and terrorist squads responsible for the rocket fire from the Gaza Strip."

It noted that during 2012, "more than 470 rockets were fired from the Gaza Strip at Israel."

Despite an informal truce between Hamas and Israel, tensions flare periodically on the Gaza-Israel border, with fighters firing rockets at Israel and the military launching retaliatory air strikes.

The last major flare-up was in June, when fighters fired more than 150 rockets at southern Israel, wounding five people, and Israel hit back with air strikes that killed 15 Palestinians.

Hamas usually does not take part in rocket launches at Israel.

Very smart. Now you will die.

These organizations do not give a damn about the safety or the well being of the Palestinians in Gaza, they are just blinded by extremism and committed to serving the interests of the Iranian and Syrian regimes no matter the consequences on the Palestinian people.

Stop been blinded by your support to Israel through the decades, the palestiniens are the ones who are trying to respond to the continuous attack on Gaza with a a modest means.

you are no longer phoenician, you are now Roofus bin doofus. I don't give a flying poop where you crawled out from, but you are an ARAB.

Cloudhopper,you are a typical idiot speaking out of your rectum. Do ur research than u r in a position to debate the issue with me.