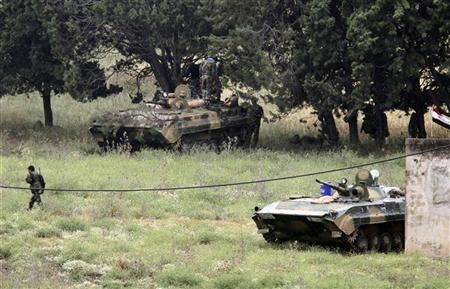 "Two shells fired from Syria fell on al-Abboudiyeh and Hakr Janin while other towns are being targeted by heavy gunfire," Radio Voice of Lebanon (93.3) reported.

Meanwhile, al-Manar television said the Lebanese army deployed heavily in the town's outskirts “after an armed group opened fire from the Syrian side of the border.”

Where's the resistance? Army? Help? It's all BS! Fouda no thanks to the scumbag rats HA!

We now wait for Turkey to fire back. Our government is simply impotent.

Farsi Motormouth again with his "EVERYONE else did it BUT HA, Syrian regime and Iran". Get you head out of your derrière you conditioned fool! Mishmakoul sho mastool!

yeah yeah, it's an armed group....rriiiiight! I wish our government will either grow balls like the Turkish government or resign...I would rather they resign

That's absolutely right J. Look what the Turks did!

That is the same area Hizbcocaine is fighting too and shelling from the Lebanese side of the border. Before Syria and Hizbcocaine would not allow the Lebanese army there. Now they decided to put the army there heavily? Something smells here. Of course Manar is just a Persian news outlet. The army should be careful up there. My guess is that Hizb and Syria might get some of them killed by "armed groups" in order to get Lebanon on the side of ASSad.

Where are the Hizbees with their thousands of rockets to defend Lebanese borders...We witness again that these illegal weapons are only used to defend Assad and Iran and in attacking fellow Lebanese...Hizb of traitors....

yes and hezbos are helping syrians keep resisting in the quietness of the golan....!

Jaish=jaj. should not be called an army

The army is a mashkara , I'm not talking about the foot soldiers but the leadership and command. Obviously Syria has a lot of high ranking government and security officials on it's payroll. Lebanon needs a coup or something because unfortunately, most of the big players are corrupt bastards that serve there masters in Tehran and Damascus

Lebanon should set up detention camps for terrorists crossing back and forth from and into Syria and not refugee camps.