Romney: Obama 'Has Failed to Lead' in Syria, Middle East 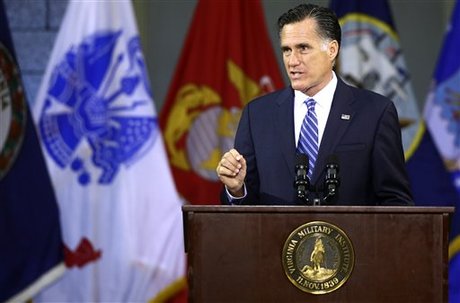 Barack Obama has "failed to lead" in the Middle East and the strained ties between his White House and Israel have emboldened Iran, presidential challenger Mitt Romney declared Monday.

In a major foreign policy speech, Romney warned the president's dithering had increased instability in a region clamoring for U.S. leadership and left both the United States and its Middle East allies less safe than they were.

With the slowly improving economy providing less ammunition four weeks from the November 6 election, Romney's address at the Virginia Military Institute marked a bid to muscle in on turf largely seen as Obama's preserve.

"The president has failed to lead in Syria, where more than 30,000 men, women and children have been massacred by the Assad regime over the past 20 months," Romney declared.

He said Syria's rebels do not have the necessary weapons to battle Bashar Assad's troops and claimed Obama's handling of the crisis was emblematic of a president who does not "shape history" but opts to "lead from behind."

"In Syria, I will work with our partners to identify and organize those members of the opposition who share our values and ensure they obtain the arms they need to defeat Assad's tanks, helicopters, and fighter jets," Romney said.

Obama, worried that shoulder-fired missiles and other heavy weapons could end up in the hands of terrorists, has not provided arms for the rebel groups, although he has arranged for the delivery of communications equipment.

Romney acknowledged that Obama had had some foreign policy successes, notably the killing of chief terror suspect Osama bin Laden, but said that the Democrat incumbent would not leave the world a safer place.

"But when we look at the Middle East today -- with Iran closer than ever to nuclear weapons capability... with violent extremists on the march, and with an American ambassador and three others dead (in Benghazi, Libya) likely at the hands of al-Qaida affiliates -- it is clear that the risk of conflict in the region is higher now than when the president took office," he said.

The Republican nominee said he would keep Iran in check, chase terrorists in Libya and impose conditions on U.S. aid to Egypt.

"I know the president hopes for a safer, freer and a more prosperous Middle East, allied with the United States. I share this hope. But hope is not a strategy," Romney said.

"It is time to change course in the Middle East," he stressed.

Romney put adversaries on notice that as president he would not tolerate the anti-American unrest that has been allowed to fester under Obama.

The speech comes the week after the first presidential debate, in which Romney was widely seen as trouncing an ineffective Obama.

And with the race appearing to narrow in the debate's aftermath, the Romney team appeared to sense a foreign policy opening with the Obama administration's confused explanation about events in Libya.

Romney used the September 11 attack on the consulate in Benghazi as an example of how extremists are exploiting perceived U.S. weakness.

"The attacks on America last month should not be seen as random acts. They are expressions of a larger struggle that is playing out across the broader Middle East," Romney said adding that Benghazi "was likely the work of the same forces that attacked our homeland on September 11th, 2001."

But Madeleine Albright, a secretary of state under Democrat Bill Clinton, said Romney's speech was disturbingly light on specifics, and that if she were grading Romney's recent Wall Street Journal op-ed where he laid out the same arguments, she would give him a "C."

"There's an awful lot of rhetoric, but when you get to the specifics, you don't get the sense that he knows exactly what tools to use and how to operate in an international setting," Albright told reporters.

She also accused Romney of promoting a "Cold War tone" with his comments about Russia.

Romney threw down the gauntlet to Russian leader Vladimir Putin, saying that if elected he would show "no flexibility" on missile defense.

He was alluding to Obama's remark to Russian President Dmitry Medvedev, caught on an open microphone earlier this year, that he would have greater flexibility to negotiate on missile defense should he win re-election.

Plans for a NATO-backed missile defense shield in Europe have angered Moscow, which wants guarantees that the system will not be used against it.