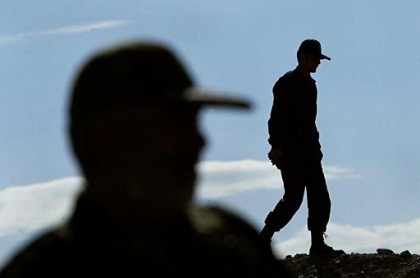 Three Iranian border guards were killed in clashes with armed drug traffickers near the border with Pakistan, Iranian media reported on Thursday, citing a border official.

Two drug traffickers were also killed in the clash near the region of Koshtegan in the southeastern province of Sistan-Baluchestan, Colonel Mehdi Mansourzadeh said.

Mansourzadeh said Iran had seized 50 tons of various drugs in the frontier regions with Afghanistan and Pakistan during the past six months.

Iran is a major transit route for drugs trafficked from leading narcotics producer Afghanistan, with much of the substances bound for Western countries.

The Islamic republic says it is fighting a deadly war against drug traffickers who make up half its prison population. Drug trafficking is punishable by death.

More than 4,000 police officers and soldiers have been killed during the past three decades in clashes with the traffickers, who often travel in heavily armed convoys, according to officials.

Iran has spent more than $700 million on building a "wall" along lengthy stretches of its 1,700-kilometer (1,050-mile) eastern border with Afghanistan and Pakistan in a bid to stop the trafficking, officials say.

Tehran's anti-drugs efforts are regularly praised by the United Nations Office on Drugs and Crime, which regularly provides the country with financial and other assistance.

However, the United States has accused some Iranian officials, particularly within the elite Revolutionary Guards, of facilitating the transit of drugs produced in Afghanistan in exchange for the services of drug lords in its eastern neighbor.

Iranian officials in return accuse Western and Israeli intelligence services of promoting drug in Iran in an effort to destabilize the country.