Thousands March in Mali to Urge Armed Intervention against Islamists 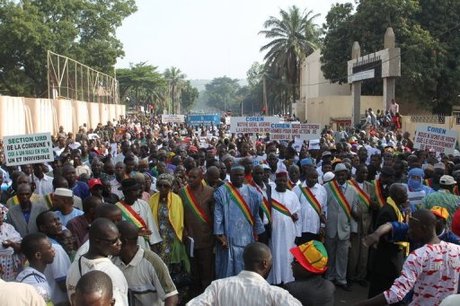 Several thousand people marched Thursday in Mali's capital Bamako to call for armed intervention by a west African force to help wrest back the vast north from armed Islamist groups.

The demonstrators carried banners and placards expressing support for the Malian army, Prime Minister Cheick Modibo Diarra and the Economic Community of West African States (ECOWAS), which is preparing to send troops if it gets the backing of the United Nations and western countries.

One of the banners read: "Captain Sanogo, all soldiers to the front." Captain Amadou Haya Sanogo was behind a March 22 coup that toppled president Amadou Toumani Toumani Toure and caused chaos, opening the way for the Islamists, including Al-Qaida in the Islamic Maghreb (AQIM), who are applying hardline Islamic sharia law in northern cities under their control.

Sanago stepped down from power last April, but remains influential in Bamako, where his men are accused of many human rights abuses.

Other slogans and banners targeted Tuareg rebels of the separatist National Movement for the Liberation of the Azawad (MNLA), which launched an offensive in the north in January. At first allied to the Islamists, the MNLA was swiftly overpowered and sidelined by them.

A draft resolution drawn up by France and its partners on the U.N. Security Council urges ECOWAS and the African Union to make clear within 30 days what means they would use to reconquer the north of Mali.