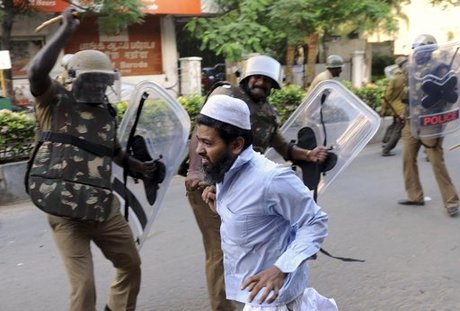 The men were members of the home-grown Indian Mujahideen outfit and were behind a series of blasts in August in the western city of Pune that left one person injured, New Delhi police commissioner Neeraj Kumar said.

"With the three arrests we have prevented a major strike in Delhi," Kumar told reporters.

He said the arrests followed the interrogation of Syed Zabiuddin, who was arrested in June in connection with the 2008 Mumbai attacks by Pakistan-based gunmen which left 166 people dead.

"These three are Indian Mujahideen operatives and linked to a Lashkar figure so it proves that the two groups have close links at some level," Kumar said, adding the suspects had been picked up after traveling to the capital.

The Indian Mujahideen claimed responsibility for blasts in July 2008 in Ahmedabad city when 45 died and in Delhi two months later when 20 people were killed.

The city of Pune in the western state of Maharashtra saw a major restaurant bombing in 2010 killed 17 people.