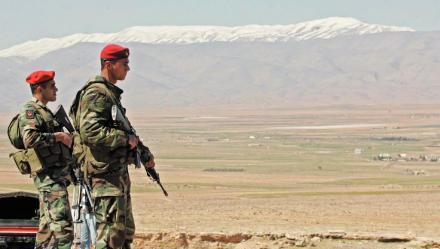 According to the report, the missiles can shoot down advanced military warplanes.

The newspaper said that Syria's step is precautionary in case Turkey uses Lebanese territories to attack it.

Tension escalated between Turkey and Syria recently after a spate of cross-border shell and mortar firings.

Turkey, which has been vocal in its criticism of Syrian President Bashar Assad's crackdown on the opposition, has beefed up its military presence along the 910-kilometer frontier after shelling from Syria killed five Turkish civilians in a border town last week.

The poorly-demarcated Syrian-Lebanese border has witnessed a number of violations since the revolt against Assad began in mid-March 2011.

Lebanon and Syria share a 330-kilometer border, but have yet to agree on official demarcation.

Must be to defend themselves against our mighty air force...

Our Hawker Hunters will beat the hell out of them!

could you explain to us why you defend so ferociously the syrian regime knowing all the killings murdering torturing destruction of lebanese villages they ve done? is it stockholm syndrom? is it because you dream of this kind of regime for lebanon? is it because hezbollah says so?
a normal person would rejoice to see this regime in difficulties after all they ve done to us! but M8? they seem to forget...and by their support and yours, agree with what syria has done to lebanese...
they harmed our economy, they are at the root of corruption, they killed and kidnapped so many lebanese but you still defend them? how come?
explain to us please...

waw! always the same propaganda...you don t remember what aoun said concerning the theft of our economy it seems... M8 amnesia as usual.forget that many of your M8 friends were in power too!
if you were truly concerned by lebanon you d be happy to revenge those killed by your beloved regime. even if a regime that doesn t suit you appears, then you may react and fight it at that moment! but you base your support on assumptions created by bashar and your friends to frighten you! you do exactly what is asked from you! brave little soldier...

like it or not mowaten and ft these kind of regimes are now part of history and you with them! funny how you know the outcoming of this war by knowing that salafis will govern? where did you see that? in your M8 crystal ball? if you don t know the harm this regime is still doing to lebanon then educate yourselves.
you believe that syria and hezbos are the future of lebanon? they both don t respect the state and laws. how naive you are! syria takes lebanon for its lackey and hezbos for its iranian playground!
you whine when israel cuts a tree in lebanon but applaud when syria bombs it! see how stupid you both are? you make me laugh... it is not to a foreign country to enter lebanon and do justice! sovereignty means something to you? i see it doesn t as long as syria is involved! you only deserve despise...

"but thanks to internal help. people who were happy to split the loot." among which lots of M8 people too so stop throwing the blam on one camp for all the miseries in which you leaders had a big share!
you both are defending syria because they support M8. without the help of bashar you perfectly know that M8 will fall down.you are more afraid of that than defending people s will in syria!
you are against muslim brotherhood but you support an islamic resistance! both muslim extremists! chia extremists see it as a jihad to kill sunnis which are not true muslims to them... but for you one extremism is better than the other! don t you see your contradictions give you zero credibility? lol
double M8 standards as usual...

if it s the will of the people to have muslim bros in power, what does it have to do with you? it s their choice, not for you neither me to decide...
if such is the case and if they want to harm lebanon then you will have the right to fight them back!
but defending such a murderous regime? no way....

free elections in a dictatorship. ROFL! you truly believe in the word "free"?

waw you are naive mowaten!

Soon there will be expensive fireworks over Syria

don t be so optimistic! M8 in such case will prefer to burn down lebanon rather than lose their privileges and ignite a regional war to help save them...

the same BS comments again and again ! :)
wahabism/alqaeda versus welayatal fakih!
well for me both are rejected, and the only acceptable thing is freedom and prosperity.

Mowaten you defend syria because you are shia full stop be honest for once in your life.

Funny how we try to defend the undefendable, regimes such as syria,egypt, uae, iran etc.. or anywhere else are wrong, against the free will of their popuation and counter productive. unfortunatley the arab world are about 20-30 years from become competent people where they can make their own decisions without reference to religion, a particular political head, sect or what ever nose ring they are pulled around with.. I think if a leader truly has the best interest of his people he would try to avert confontation even back down meaning his ego may be a little bruised, once it becomes evident that there could be blood shed, or lose of control as we saw in the eary stages of the syrian uprising. except they send in their milita's and thugs to intimidate, kill and incite greater revolt.

We however, which ever political divide we stand along as lebanese should not greatly concern ourselves with our neighbours and their internal politics as much as own own. If we even showed half the vigor as demonstrated on the site towards getting our house in order and turning our country into a truly democratic state we all boast about, we would be in a much better position to then interfer in regional developments, until then we will have a democracy where every za3im and his sheep bicker over un lebanese ideolgies, personal agendas and self interests against the national interest. There is no such thing in lebanon as a 'swinging voter' why? because we love to take sides and fight for our ego's not our future.

both sides may be right in ther opinions at some stage however it is with self interest that they spin their BS and we continue to follow them into the unknown. before we start making comments on what happens under a rock 5000 kms away lets try to fix what rocks we have at home.

Wishful thinking on behalf of the Syrian regime, The downed drone with a few more violations by HA will not draw Israel to retaliate, the Israel's are to smart for that, and if they do, that will only prove that Israel is intentionally trying to save Bachaar.