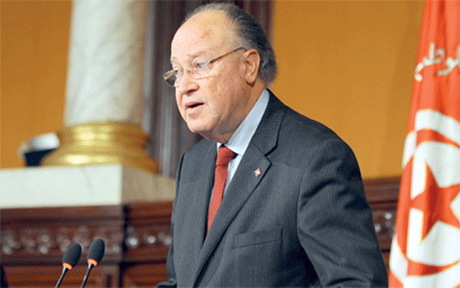 A key proposal by Tunisia's ruling Islamist party to outlaw blasphemy in the new constitution, which stoked fears of creeping Islamization, is to be dropped from the final text, Assembly speaker Mustapha Ben Jaafar told Agence France Presse.

The agreement to drop the clause follows negotiations between the three parties in the ruling coalition and must still be approved by the committees drafting the constitution, which Jaafar said would be debated by parliament next month.

It comes after President Moncef Marzouki warned that radical Islamist militants pose a "great danger" to the Maghreb region, and following a wave of violent attacks -- blamed on Salafists -- on targets ranging from works of art to the U.S. embassy.

"There will certainly be no criminalization," Jaafar, the 72-year-old speaker of the National Constituent Assembly, said in an exclusive interview.

"That is not because we have agreed to (allow) attacks on the sacred, but because the sacred is something very, very difficult to define. Its boundaries are blurred and one could interpret it in one way or another, in an exaggerated way," he added.

The plan to criminalize attacks on religious values sparked an outcry when it was first announced by the Islamists in July, with the media and civil society groups warning that it would result in new restrictions on freedom of expression.

Jaafar argued that freedom of expression should be guaranteed, as a key achievement of the mass uprising that ousted former president Zine El Abidine Ben Ali last year.

"There is a fundamental achievement of the revolution that should never be called into question, and that no one should be able to challenge, which is the freedom of expression and of the press."

Government critics have also warned of creeping Islamization in the North African country since Ben Ali's regime was swept away.

Jaafar said that Ennahda, the Islamist party that heads the ruling coalition, will accept dropping the blasphemy clause even though it was at the heart of its political agenda.

Ennahda had even wanted to see its proposed ban on attacks on the sacred become international law, but had modified its position, said Jaafar, who heads Ettakatol, a leftist party allied to the Islamists in a coalition government.

"Sometimes we hold talks within the troika (three-party ruling coalition) and we feel that they (Ennahda) are prepared to let their opinions develop, to move the lines a bit," he added.

Tunisia's interim parliament is tasked with drafting a new constitution but the main sticking point in that task, which has been much-delayed and has threatened to set back elections set for 2013, is the nature of the political system, Jaafar said.

The Islamists have been pushing for a pure parliamentary system, while the other parties want important powers to remain in the hands of the president.

"I have high hopes that a compromise will be found," he said, recalling that Ennahda had already agreed not to insist on Islamic sharia law.

A first draft of the text will be submitted to the Assembly in November, and then each article will be debated between December and January, Jaafar said, adding that he expected the elections to take place before next summer.

Jaafar admitted to "mistakes" by the coalition government, which has been accused of authoritarian tendencies, and of having failed to make progress on social and economic issues that were driving factors behind the revolution.

"It is a government where certain officials lack experience and have made mistakes. There have been successes and there have been failures," he said, referring to a woman accused of indecency who was raped by policemen.

Jaafar also lamented the ruling coalition's failure to rein in Tunisia's increasingly assertive Salafist movement, for which it has been sharply criticized.

"The government has lacked firmness" towards the radical Islamists, blamed for a spate of violence, including an attack on the U.S. embassy in Tunis last month, that has "tarnished Tunisia's image," Jaafar said.