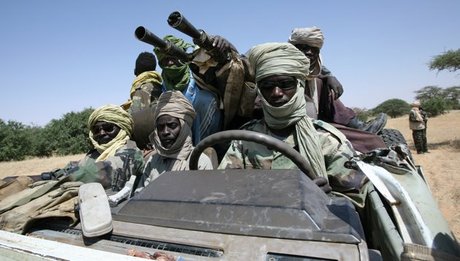 Rebels in Sudan's Blue Nile state said on Monday they had destroyed a Sudanese tank and captured two others but the army dismissed the report as propaganda while acknowledging fighting in another border region.

Both sides said they had fought in South Kordofan state despite a Khartoum-Juba deal aimed at cutting South Sudanese support for the insurgency.

The ethnic and religious-minority Sudan People's Liberation Movement-North (SPLM-N) said it captured the tanks and other weapons during a three-day battle that ended Sunday with their seizure of Surkum, 50 kilometers (30 miles) northwest of Kurmuk town in Blue Nile.

But Sudanese army spokesman Sawarmi Khaled Saad denied the incident. "They didn't attack any of our positions in Blue Nile. They only want fabrication and media propaganda," he told AFP.

The army and rebels both said there had been fighting around Kologi town in the eastern part of oil-producing South Kordofan, where the SPLM-N has been fighting since June last year. Fighting spread to Blue Nile in September 2011.

Hundreds of thousands of people have been displaced or severely affected by the violence in both states, the United Nations says.

"Yesterday they tried to attack one of our positions near Kologi and we responded, killing 15 of them," Saad said.

The rebels' Lodi said insurgent forces attacked and then withdrew, but remain in the area.

Both sides at times have an interest in inflating casualty figures, a Sudan analyst says.

The United Nations condemned the attack.

SPLM-N said it regretted any civilian casualties that may have been caused but said its artillery fire was self-defense in the face of government shelling and aerial bombardment of rebel positions.

The action came after Sudan and South Sudan in late September signed deals on security and cooperation that they hailed as ending their countries' conflict.

The neighbors fought along their undemarcated frontier in March and April, sparking fears of wider war and leading to a U.N. Security Council resolution ordering a ceasefire and the settlement of unresolved issues, under African Union mediation.

Among the deals reached in Addis Ababa is agreement on a demilitarized border buffer zone designed to cut support for SPLM-N rebels in South Kordofan and Blue Nile states.

The SPLM-N battled alongside insurgents from southern Sudan who waged a 22-year civil war which ended in a 2005 peace deal leading to South Sudan's independence last July.

Khartoum says the government in Juba backs the insurgents, and South Sudan in turn says Sudan has armed rebels in its territory.

Sudan also accused South Sudan of working with Justice and Equality Movement (JEM) rebels from Darfur, who are members with SPLM-N of a Revolutionary Front to overthrow the Arab-dominated Khartoum regime that they say is unrepresentative of the country's diversity.

JEM on Monday said it clashed with the army in western South Kordofan, in its latest strike across the border from Darfur. The group said it killed government troops and seized equipment, but there was no immediate comment from the army.

The United Nations has stressed the need for a political settlement in South Kordofan and Blue Nile.

Link exchange is nothing else except it is just placing
the other person's blog link on your page at suitable place
and other person will also do same for you.