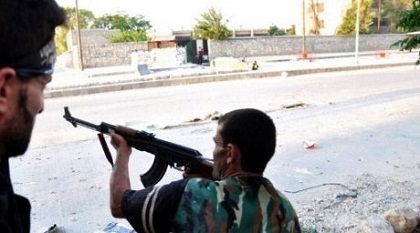 "The Syrian airforce have made no less than six sorties early morning, pounding the villages of Deir Sharqi, Maarhtat and Bsida, east of Maaret al-Numan," which rebels captured a week ago, the Syrian Observatory for Human Rights said.

Violent clashes also erupted in Maarhtat, where rebels attacked a six-tank convoy of government troops as it made its way to reinforce the Wadi Deif army base, the largest in the region.

Maaret al-Numan is strategically located in the northwestern province of Idlib, on the highway linking Damascus to embattled Aleppo, Syria's second city and commercial hub.

The rebel blockade of the highway is preventing army reinforcements from reaching Aleppo, which has been the theater of intense fighting for the past three months.

At least five people were killed across the province of Aleppo and the city of the same name as government forces pounded the area and clashed with rebels who fired rockets into an army base, the Observatory said.

Further south, in the central city of Homs, nicknamed the capital of the 19-month anti-regime uprising, troops shelled the rebel neighborhoods of Khaldiyeh in the north and Juret al-Shiyah in the center.

Violence also erupted in areas around Damascus, said the British-based Observatory which relies on a network of activists, lawyers and medics on the ground inside Syria for its information.

Rockets rained on Douma, the capital's rebel-held northeastern suburb which was also rattled by gunfire, it said, adding that the southern suburb of Artus and Yabrud in the north were also shelled by troops. Heavy clashes erupted in the town of Nabk north of Damascus.

The Observatory says that more than 33,000 people have died since the revolt against the regime erupted in March last year.

"The Syrian airforce have made no less than six sorties "
and how many over the golan heights? none! lol! see where their enemies are: their own people but let israel live in peace and M8 call this country "resistant" what a farce! lol!