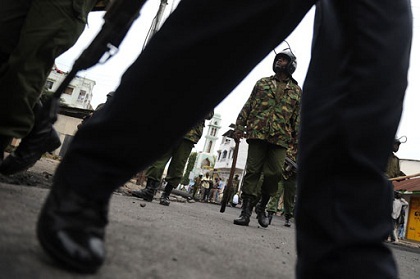 A Kenyan police officer was killed and nine others wounded Wednesday when suspected Islamists hurled a grenade at them during a house raid in a clash that left two assailants dead, police said.

The violence was the latest in a string of clashes and police raids on Kenya's coast, a popular tourist region where Islamists and a separatist movement have increasingly battled with security forces.

"One of the officers died in hospital...eight others are still in hospital," Adoli said. One officer was discharged.

"We have intensified the search for more suspects, we want to ensure the area is safe," he added.

Adoli said police had shot dead one of the attackers, while the other was killed by one of his own grenades.

The raid was carried out after a tip-off in the coastal Likoni region, just south of Kenya's main port Mombasa, and police recovered two firearms, two live grenades and ammunition, he said.

Kenyan police have in recent days launched a crackdown on members of the Mombasa Republican Council, a separatist group. On Monday two people were killed as police arrested MRC leader Omar Mwamnuadzi.

The latest violence has raised fears that political unrest could mar elections which are due to take place in March, five years after deadly post-poll killings shattered Kenya's image as a beacon of regional stability.

The MRC claims that the predominantly Muslim coastal region is not part of Kenya and says it has been neglected by the central government.

However Adoli initially ruled out any link between Wednesday's incident and the MRC.

Suspected supporters of the Shebab -- including Kenya's Muslim Youth Center (MYC) -- have carried out attacks over the past year in Coast province, with bars and churches among their targets.

Shebab sympathizers have also attacked police in other parts of the country.

MYC leaders are accused by the United States and United Nations of supporting Somalia's insurgents, including recruiting and fundraising for them.

Kenyan troops, now integrated into an African Union force, last month seized the Shebab bastion of Kismayo, a key southern Somali port, prompting warnings of retaliation from both the group and the MYC.

Tourism on the Kenyan coast, a major pillar of the region's economy, has been badly dented, with visitors scared off first by a spate of kidnappings of foreigners in 2011 and then by sporadic violence attributed to Islamists.