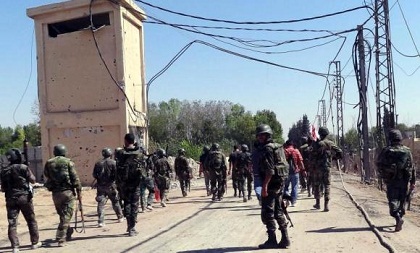 The Syrian authorities have tightened security measures around government buildings in Damascus for fear of new rebel attacks, a pro-government daily reported on Wednesday.

Concrete fortifications have been erected around the building housing the state news agency SANA in the Baramkeh district of the heart of the capital.

Similar measures have been taken for Damascus town hall in the Salhiyeh district, also in the city center, it said.

For several months, Damascus has seen a heightened security presence after parts of the city became combat zones for clashes between the army and rebels, and there have also been multiple attacks on government buildings.

Bombings claimed by rebels have targeted several intelligence buildings, the police headquarters in central Damascus and the army headquarters.

Several roads have been closed to traffic and the number of checkpoints has increased, causing widespread traffic jams.

The conflict in Syria has killed more than 33,000 people since the outbreak of an anti-regime revolt in March last year, according to the Syrian Observatory for Human Rights.