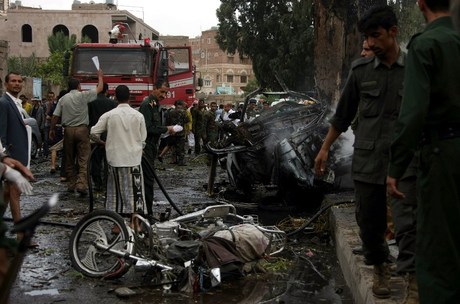 A shell fired accidentally at an army weapons depot in the Yemeni capital killed two people and wounded seven others on Thursday, a security official told Agence France Presse.

"Initial information indicates that a shell was (accidentally) fired at the weapons depot" from a nearby military facility where troops "were training," the official said on condition of anonymity.

One of the victims was a soldier while the other was a civilian who lived near the depot. Of the seven wounded, five were soldiers and two were civilians.

Witnesses said the shell that struck the weapons depot set off a series of explosion which rang out across the city and large plumes of smoke could be seen rising from the site.

Debris and shrapnel from the blast spilled into surrounding neighborhoods, they said.

The shell hit a barracks under the command of General Ali Mohsen al-Ahmar, who had joined last year a popular uprising against now ousted president Ali Abdullah Saleh.