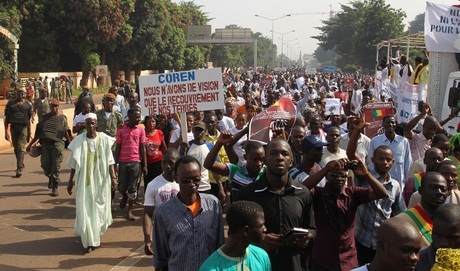 Some 2,000 people took to the streets in the Malian capital Thursday to protest plans for a foreign military intervention to reclaim territory seized by armed Islamist groups in the north.

The march was organized to support Mali's own army and to protest plans by the Economic Community of West African States (ECOWAS) to send in a regional force, but failed to match the numbers of a pro-intervention march a week ago, which drew some 10,000 people.

The march was called by an umbrella group of civil society groups called the Coordination of Patriotic Organizations of Mali (COPAM). Last week's march was sponsored by political parties, unions, and non-COPAM organizations.

Once considered one of Africa's most stable democracies, Mali was plunged into chaos by a March 22 coup that overthrew the government of president Amadou Toumani Toure.

A series of Islamist groups including al-Qaida's north African branch capitalized on the power vacuum to seize the country's vast desert north, an area larger than France.

The Islamists have been imposing their strict version of sharia on areas under their control, arresting unveiled women, stoning an unmarried couple to death, publicly flogging smokers and amputating suspected thieves' limbs, according to residents and rights groups.

Much of the crowd at the anti-intervention march was made up of followers of Muslim religious leader Cherif de Nioro Haidara.

The protest came on the eve of a high-level international meeting in Bamako aimed at hammering out a strategy to reconquer the north.

On October 12, the U.N. Security Council passed a resolution asking West African nations to speed up preparations for an international intervention and giving them 45 days to lay out detailed plans.

ECOWAS has said it has 3,000 troops on standby for a mission to reclaim the north.