One Dead as Rival Groups Clash in Tunisia 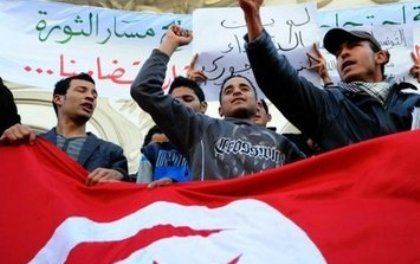 An opposition party coordinator in the southern town of Tataouine died Thursday as his supporters clashed with those of the Islamist-led government, his Call of Tunisia party and the interior ministry said.

A party official told Agence France Presse that Lotfi Naguedh died after being beaten by pro-government demonstrators who attacked his office.

A Call of Tunisia spokesman retorted: "Even if it was a heart attack, it was directly linked to the attack."

The party was founded in June by Beji Caid Essebsi, a senior official in the first years of ousted president Zine El Abidine Ben Ali's rule, who served as interim premier in the aftermath of the veteran strongman's ouster last year.

The ruling coalition accuses him of regrouping former regime officials and seeking to undermine the government.

The League for the Protection of the Revolution, a grouping close to the ruling coalition, had called the demonstration on Thursday that then marched on the headquarters of a local trade union which Naguedh headed.

Outside the union building, the demonstration degenerated into clashes in which stones and Molotov cocktails were thrown by both sides, the interior ministry said.

"Police reinforcements were deployed and separated the two sides," the ministry spokesman said. "The situation is now calm."

Call of Tunisia insisted the violence came solely from the pro-government demonstrators.

Last month, Lakremi charged that a member of the government, whom he did not identify, was plotting to assassinate the party leader Essebsi.

The League for the Protection of the Revolution has hit back with fiery rhetoric of its own, promising in an October 13 statement to make the "enemies of the revolution and henchmen of the old regime... regret that they did not take their own lives."

The bad blood between the two sides has impacted on efforts to thrash out a post-revolution constitution so that a new date can be set for fresh elections that had been due to take place this year.

Two parties in the governing coalition -- Islamist Ennahda party of Prime Minister Hamadi Jebali and the center-left Congress for the Republic of President Moncef Marzouki -- boycotted crisis talks on the new constitution on Tuesday to protest against the participation of Call of Tunisia.

They did so even though both leaders attended.