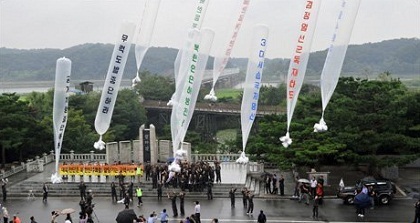 The North Korean army threatened Friday to carry out a "merciless military strike" against South Korea next week, in a serious escalation of cross-border tensions.

The Korean People's Army (KPA) vowed to initiate the strike if a group of North Korean defectors now living in the South went ahead with plans to scatter propaganda leaflets next Monday from balloons floated over the border.

"The moment a minor movement for the scattering is captured... a merciless military strike by the Western Front will be put into practice without warning," the KPA said in a statement carried on the official Korean Central News Agency.

Residents in and around the area where the activists plan to launch their balloons should "evacuate in anticipation of possible damage", the statement said.

"The surrounding area will become targets of direct firing of the KPA," the statement said, adding: "The KPA never makes empty talk."

A group of North Korean defectors plan to carry out the leafleting exercise on October 22 at 11:30 am (0230 GMT) at the border near the town of Paju, around 60 kilometers (35 miles) north of Seoul.

Such exercises are relatively common and North Korea has threatened action in the past, but Friday's statement was unusually strong with its specific naming of the time and location, coupled with the evacuation warning.

It comes at a time of heightened border tensions, and a day after South Korean President Lee Myung-Bak made a surprise visit to an island close to the disputed maritime border that was shelled by Pyongyang two years ago.

During his visit, Lee told troops stationed on the island that they should "fight to the death" to protect the border and "retaliate strongly" in the event of any North Korea provocation.

There have been widespread concerns in the South that Pyongyang may try to instigate a military clash that would temporarily destabilize the Korean peninsula in the run up to South Korea's presidential election in December.

Some 28,500 US military personnel are stationed in the South -- a legacy of the Korean War that ended with a ceasefire but not a peace treaty, leaving the two Koreas still technically at war.