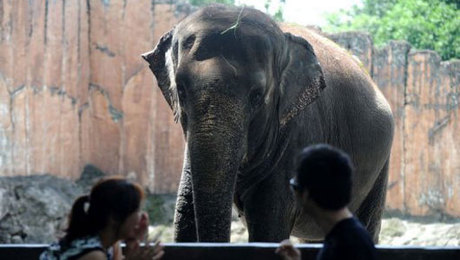 A female keeper at Sydney's Taronga Zoo was fighting for her life Friday after being crushed against a fence post by "miracle" elephant Mr Shuffles, an animal she had cared for all its life.

An ambulance spokeswoman said emergency services were called to the elephant enclosure and discovered that a woman in her 40s had been badly hurt.

"She had critical injuries, multiple injuries. The patient was unconscious and had stopped breathing," the spokeswoman told Agence France Presse.

Paramedics later told reporters that the woman suffered severe chest injuries and her heart stopped beating for five minutes before she was revived and rushed to hospital.

Zoo director Cameron Kerr said the injured keeper had worked with the elephant, Pathi Harn, since its birth in 2010, an event that made headlines at the time.

Better known as Mr Shuffles after its early wobbly attempts at walking, the elephant was believed to have died during labor but was born alive, defying expert opinion that such an outcome would take a "miracle".

The zoo said the woman was conducting a routine training session when "a young male elephant pinned the female keeper against a bollard".

"Two other keepers in an adjoining stall responded to her call and moved the elephant away," it said in a statement, adding the public was never at risk.

"An investigation has been immediately commenced into this incident and what may have prompted the reaction. It's unknown at this time why the young elephant challenged the keeper."

Kerr described the elephants at the zoo as "domestic" because they "come from families brought up with people", adding: "There's a very close bond between our staff and our animals."

A small herd of Asian elephants was brought to Australia from Thailand in 2006 in a bid to increase numbers of the endangered animals and Taronga Zoo now has eight in captivity.

Friday's incident is not the first animal attack at the zoo, which is on the banks of Sydney Harbor and a popular attraction for tourists.

In 2010, an 11-year-old boy was mauled by a sea lion during a show after being chosen from the audience to get up close to the creatures.