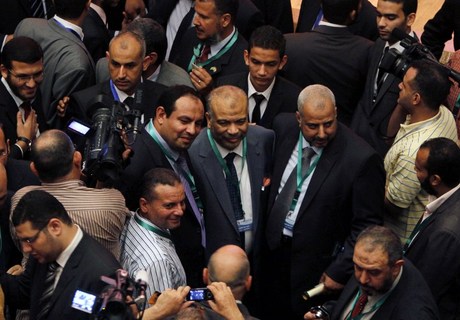 Katatni, who headed the Islamist-dominated parliament dissolved shortly before Morsi's election in June, beat his rival Essam al-Erian with roughly 67 percent of the vote by party delegates.

Erian was the acting head of the party, founded by the influential Muslim Brotherhood movement, after Morsi stepped down on having been elected the country's president.

In a speech after his election, Katatni said one of his "main priorities is to cement national unity."

Katatni is believed to be closer to powerful hardliners in the Muslim Brotherhood movement such as deputy leader Khairat al-Shater, who was the Brotherhood's first pick for the presidency before his disqualification.

But Erian, who had cultivated a reputation as a pragmatist willing to work with non-Islamist groups, has come under fire for incendiary remarks against the Islamists' opponents.

He is under criminal investigation for allegedly inciting clashes last week between Islamists and their opponents during simultaneous rallies held in Cairo's Tahrir Square.

The clashes, which left scores wounded, revealed the extent of the rift in the post-uprising country over the Islamists' unprecedented control of the country.

A constituent assembly drafting a new charter, to replace the one suspended after Hosni Mubarak's ouster in the uprising last year, is heavily influenced by the religious conservatives.

A court, acting on complaints from the assembly's opponents, is expected to rule on its legality on October 23.