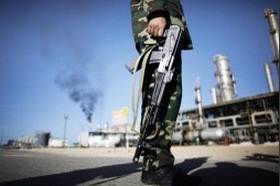 "The shelling is ongoing so the number of casualties could grow," he said, adding that those killed were a 13-year-old boy and a man in his fifties.

The military commander of the town, Salem al-Waer, gave a higher toll and said shelling had intensified. "Five people were killed and more than 40 homes destroyed by rocket fire and mortar rounds," Waer told Agence France Presse by telephone.

Skirmishes between Bani Walid fighters and Misrata "militias" were concentrated on the outskirts of the hilltop town, including in the nearby valley of Mardum, the commander said.

"But we are in control of the town," he added.

The spike in violence comes one year after rebels defeated die-hard loyalists of the former regime both in Bani Walid and the desert city of Sirte, hometown of Gadhafi who was captured and killed on October 20, 2011.

The crisis in Bani Walid was triggered by the death of Omran Shaaban, a native of rival city Misrata who was credited with catching Gadhafi.

Shaaban, 22, was kidnapped in July and held hostage for weeks in the oasis town, where he was allegedly tortured, before the authorities brokered his release.

He died last month of gunshot wounds sustained during his ordeal.

Libya's national assembly on September 25 gave an order to the interior and defense ministries to find the perpetrators in Bani Walid, authorizing the use of force if necessary.

Acting on the assembly's order, army troops and several brigades made up of ex-rebels encircled Bani Walid in early October and threatened to "purge" former regime remnants.

Libya Shield officers and former rebels from the city of Misrata said they had received orders to advance into Bani Walid on Wednesday but a military official swiftly denied this.

Fighting that day left at least 11 dead, according to sources in both camps.

And on Thursday clashes prevented the president of the assembly, Mohammed al-Megaryef, from reaching the town. He had been expected to meet with tribal leaders and commanders to negotiate a peaceful entry for the armed forces.

Many elders and commanders have vowed to repel any advance by "lawless militias" on the town and call into question the neutrality of the national army, which is still in the process of being formed and relies on former rebels.

They fear that they will suffer a fate similar to that of residents of Tawarga, a town that was accused of supporting the former regime and endured brutal reprisal attacks by forces from Misrata at the end of the 2011 conflict.