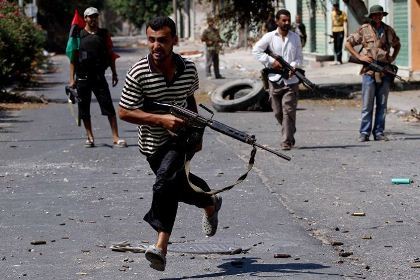 Clashes between Libyan pro-government forces and fighters of Bani Walid, a former bastion of slain dictator Moammar Gadhafi, killed nine people on Saturday and wounded more than 100 others, a medical official said.

"The hospital has received nine people killed and 122 wounded," from the fighting, said the medical official in the city of Misrata, northeast of Bani Walid, where pro-government forces are being treated.

"Most of the injuries were caused by light weapons, suggesting close-quarter fighting, and some were hurt by shrapnel," the official added, speaking on condition of anonymity.

Witnesses said that Misrata's main hospital was packed with the wounded and their distraught relatives and that ambulances were constantly arriving with more casualties from the battlefront.

The fighting erupted as pro-government forces pushed into the center Bani Walid to snuff out criminals and diehard former regime loyalists who found shelter there, Colonel Ali al-Sheikhi, spokesman of the chief of staff, said.

The violence comes exactly one year after Gadhafi was captured and killed in his hometown Sirte, which was the last city to fall to NATO-backed rebels in the 2011 conflict that ousted his regime.