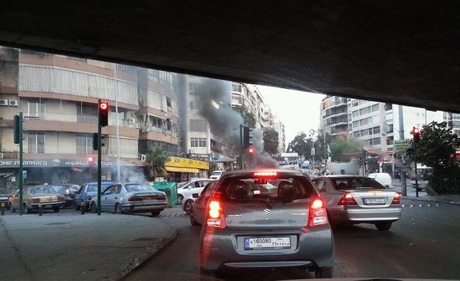 The army carried out raids in Beirut's Tariq al-Jadeedah neighborhood on Monday to restore order and detain gunmen on the streets while heavy gunfire was reported in the area.

According to the National News Agency, the army was carrying out patrols and raids in various areas in Tariq al-Jadeedah and nearby areas, including Qasqas, Barbir, Corniche al-Mazraa and Cola.

Voice of Lebanon radio (93.3) reported that the army exchanged fire with gunmen in the area.

Later on Monday, the Army Command's Orientation Directorate issued a statement saying a Palestinian gunman was killed in an exchange of gunfire with army troops.

"At noon, Palestinian nationals Ahmed and Abed Qwaider opened fire from light assault rifles at an army patrol in the Qasqas area, prompting the patrol's members to shoot back, which left Ahmed dead after he succumed to his wounds," the statement said.

"The Army Command reiterates what it had mentioned in its previous statement that its military units will deal firmly and forcefully with anyone who tampers with the security of citizens or attacks army troops, whatever their affiliation might be," it added.

In the afternoon, troop carriers entered Tariq al-Jadeedah and soldiers took up position on streets leading into it to keep them open, a military spokesman said.

For more than an hour, the sound of automatic weapons could be heard coming from Tariq al-Jadeedah.

Security sources told MTV channel that six people were wounded in the clashes.

The wounded included four Lebanese, a Syrian and a Palestinian.

Soldiers prevented reporters and photographers from approaching the area and neither the army nor security services have so far made any comment.

Al-Jadeed television carried appeals from local residents for the injured to be evacuated. Heavy gunfire could be heard in the background.

The clashes come after Sunday's funeral of Hasan, which itself was followed by skirmishes between mourners and the security forces in Beirut.

In other violence Sunday, a nine-year-old girl died during clashes between supporters and opponents of the Syrian regime in the northern city of Tripoli, Prime Minister Najib Miqti's hometown. Another eight people were wounded, security and medical officials said.

Rania, you are the biggest nourriyi

Dear Lebanese citizens do not fall into the trap of instability and lawlessness that was set up by Ass-Ad by these assassinations. It is apparent that Ass-ad will try to pull every trick he has left, one of which is to divide Lebanon and watch it burn. through his puppies Hezbo.

You stupid Lebanese citizens do you want to start another civil war in your lovely country ? What a shame, you should not let your emotions to rule you. Please think properly for in a civil war situation all side a losers. For God's sake, avoid listening to your selfish political leaders who are more concerned about themselves, all that they can make for themselves and their families and nothing for you. They will incite to violence and when things get really bad, they and their families jump on the next available flight to Paris and other European capitals where they have their homes. While leaving you brainless ordinary citizens to bear brunt of the mess that they have cause. I wish you all the best.

Let's open our eyes and admit that the Sunnis and all M14 don't trust our army's command anymore because of Hizballa's takeover of the Lebanese government and most judiciary...that's the way they feel because of obvious reasons (Assassinations, Hizb people not prosecuted for their crimes etc...)...The Lebanese government should guarantee equality and ease the Sunnis fears instead of keeping in defending Hizb interests...The Sunnis and M14 and any average person on the streets knows that Hizb currently controls Lebanese government and let's not hide behind our finger...that's the main reason for troubles and as long as Hizb keeps its illegal arms we will continue on the path of destruction...One last thing, the Sunnis areas are the main recruiting sources for our military…

These are not your mom and pop gunmen, these are the gunmen of the callers for preserving the institutions and protecting the state but "mistakenly" attack the police and army and even kill innocent by-standards. As you know, mistakes happen every single day!

ya ishret el bizer, Hezbollah killed Samer Hanna. What happened to the assassin? Oh wait, now I remember, NOTHING!

Hezbollah killed Hariri and the others, what happened to them? NOTHING!

The army is protecting them, instead of storming Dahye and jnoub, they are attacking easy targets, a few dozen lightly armed men that can't stand this injustice anymore.

Bravo Inspector Benzona. Mission accomplished. You may send the STL crew home. The mystery has been solved.

I don't detect a reply to a comment. So are you going on a tangent or does this show the level of your intelligence? The army is protecting them, huh, yet they killed Samer Hanna! Are you trying to make a point or you just want to blabber, and indication, AGAIN, of the level of your intelligence? The few dozens seem to be moving from neighborhood to another in Beirut and then to Tripoli and then to Akkar and then to Sidon and then back to Beirut only to go to Tripoli and then... What a dozen lightly armed patriots and seekers of justice by killing a few innocent kids here or there!

I cannot believe that we are so spineless, that we are willing to accept the killings and murders of innocent people, without some sort of fight.If we sit back and watch our people drop like flies because we are too scared to want something better, and because we are too accepting of everything then we have become truly pathetic.

I am a British lady living here and indeed have been visiting here since 1979. I am married to a Lebanese man and my heart bleeds for your beloved country. I love Lebanon, I know it has it's faults, too much traffic, lack of electricity etc but it also has a magic about it that pulls you in! I often check your post and amazed how you bash each other, it's too sad and fills me with dread. Please dear Lebanese you have a lovely country, don't destroy it again. I love Hamra, Achrafiyeh, everywhere, you don't know what you have really! I sadly am being treated for Cancer here and Inshallah I will live to see Lebanon a strong free nation. Carry one flag, your beautiful flag with the cedar tree on it, all other flags pale in comparison!

You spoke magic words that should dwell inside every true Lebanese. Thank you for you sensible compassion and touching words and I wish you full recovery.

"Politicians cannot continue to insist that they hold no responsibility for this kind of ugliness. Both March 14 and March 8 leaders pander to their bases by continuing to use inflammatory metaphors and language. Cut the political bullshit. This is a real tragedy.

It is only when the majority of the people in this country wake up and accept that the current leadership – in all its forms and parties – is only interested in claiming personal, strategic and political victory at the expense of the Lebanese people, that we will together to find real solutions to our problems.

Each and everyone one of us must demand reasonable national debate and disagreement. But most importantly, we must demand peace, civility and compassion."