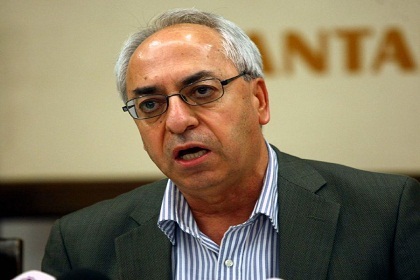 He warned: “The Syrian regime will commit more assassinations in Lebanon in order to create unrest in the country and cover up its crimes in Syria.”

“Hasan's assassination will give the Lebanese and Syrian revolts a new push aimed at toppling the dictator and build two states produced from the will of their respective people,” he told the daily.

He deemed the assassination as a “purely political one”, linking it to the August arrest of former Minister Michel Samaha on charges of forming a criminal gang aimed at carrying out attacks in Lebanon at Syria's behest.

Hasan played a major role in uncovering the plot.

“Hasan did not hide his support for the Syrian regime and he is therefore a martyr of the revolt in both countries,” noted Sayda, who also revealed that he had met with Phalange Party leader Amin Gemayel without offering further details.

“Hasan's murder will enforce the solidarity between the Lebanese and Syrian people,” he declared.

On reports that former Premier Saad Hariri had appointed MP Oqab Saqr to coordinate contacts between the Syrian revolution and opposition, Sayda said: “Coordination between us and all the March 14 forces still stands.”

“It is based on respecting the interests of both countries,” he added.

“Hariri is the son of a major martyr who loved Lebanon and Syria and sought their interests,” said the head of the Syrian National Council of Lebanese former Prime Minister Rafik Hariri who was killed in a massive car bomb in Beirut in 2005, which the March 14 camp blamed on Syria.

“He was the true resister against Israel … contrary to what the forces that claim defiance against Israel allege, starting with the Syrian regime and the resistance in Lebanon,” Sayda said.

Addressing Hizbullah, he warned: “The end of the oppressors is near and cannot be escaped.”

“The party must realize that the Syrian regime will hold negotiations at its expense and it should therefore launch national dialogue with all members of the Lebanese community,” he declared.

“Hizbullah has turned into a Lebanese party with a Lebanese agenda into one that has regional interests,” he stressed.

To the Lebanese people, he said: “We share a joint fate.”

“You have suffered from the oppression of the Syrian regime and you have been its victim,” he continued.

“The Syrian people are today suffering from the same oppression. Syria and Lebanon will not witness stability until the regime is overthrown,” he added.

Hasan and his companion were killed in a car bomb in Beirut's Ashrafiyeh district on Friday.

The opposition in Lebanon accused the Syrian regime of being behind the crime, calling on the government to resign.

The worse thing to come is that if Assad is toppled by the opposition, the lebanese will continue their infighting siding each with one side. When we lebanese will side by ourselves?

Bye bye Adha holidays, the ongoing action in our country is front news all over the Gulf. Hotel and restaurant owners will have to wait till new year. The wahabis who can afford 400$/night will not come, a blow to the economy, yes the wahabis, wayno Karim?

Whatever mowaten, don't make me say what i din't say, its up to you to swallow it the way you want, one thing is for sure its all screwed up, new government? for what? same shit different faces?

This agent's statement is a clear admission that not only are the FSA terrorists responsible for the first false flag bombing in Ashrafieh but will also be responsible for future bombings inside Lebanon aimed at pointing the finger at the Assad regime.

Yeah, well... lots of bombs have gone off, names of suspects were released, Hezbollah refused to deliver them, and other investigators who started pointing their finger at the assasins were assassinated tyhemselves...so...we are the one country on earth where the killers are never caught... in order to preserve the order...crazy huh!

now who could disagrees with my simple obvious accurate statement, Bashar is that you silly boy don't you have children to kill.. or maybe some other Syrian like FlamingTurd or mowaten sourreh.

still are two faithful hezbi dogs trying to sell their soup... as if the syrian regime never commited crimes in lebanon using the same coward method...
oh! and always one that is against syria, note it! strange isn t it?
they are soooo funny trying to find other culprits in that crime... desperate is a better word to justify their allegiance to syria....

mowaten why do they never kill anyone from M8?.. strange isn t it? why do they kill elhassan who involved two high syrian officials? FSA would kill him to prevent him from going on? LOL!
oh! and don t forget that one of yours was ready to plant bombs in christian villages in the north to accuse.... sunnis! your side is ready to do whatever it takes to make M14 look like barbarians, but samaha intentions were laudable i guess!
you need more? so you cannot prevent from being highly suspicious towards the syrian regime as they ALWAYS acted like this in lebanon...
but of course for M8 it is impossible... it proves how faithful you are to this regime, like it or not and you deserve the name i called you, coz whatever assad do you will always be faithful and find him excuses..

yes as you like. you seem to know everything. pardon my ignorance and have it your way if it makes you happy. if you truly believe that hezbollah is the solution to make lebanon thrive economically, if syria is here to help us and help the lebanese be free and sovereign and only wants the good for you and the people , if M8 is the solution to make things better and stop the corruption and reform the state, let me leave you into your hope!
if you believe that M14 is the source of all evils and at the feet of israel, you must be a happy man to have such a convinced position.
the world seems easy with M8, just like george bush there are two camps: the good and the bad! obviously M8 are the good ones and M14 the bad ones.
again sorry for contradicting your truths, those against M8 are really dumb people! good life...

ask jamil elsayyed he may have a few answers....

How does this man know that? maybe it is his salafist thugs committing those Gea-Gean crimes? Having said that, the Assad regime is capable of even more. We have witnessed what that regime committed in Lebanon throughout the 70s, 80s, and 90's under the protection and tutelage of the USA, and its allies (including the ARABS). The silent majority must rise!!! and topple all the thugs running our country.

General Aoun: "By the way, I remind you here that the Syrian regime had said that it came to ‎Lebanon to save its Christians from extermination. I want to ask this regime who, apart from ‎it, in fact wanted to exterminate us?" MTV 2002

little Johnny, did it cross your mind that maybe the butcher Assad of Syria could plant such bombs or is he too innocent and civilized to attempt such an act...hum ask Smaha "Bachar Wanted it"...

More sewage spewing from Farsi Motormouth. Your posts clearly reflect your standard ignorance and fear that soon your regressed stone-aged butchers will be going down!

Guys, after long time of bickering, it appears that actually u love each others ! :)