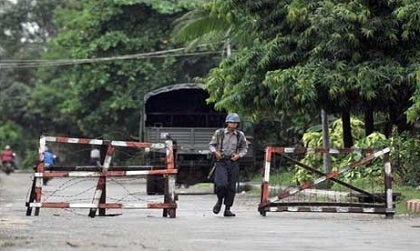 Three people have been killed in a fresh outbreak of communal violence between Muslim Rohingya and Buddhists in Myanmar's western Rakhine state, a local official said Tuesday.

Hundreds of homes were also torched in the clashes that affected two neighboring villages, he said, adding: "The two villages were very close. More than 300 houses were burnt down."

Dozens were killed in Buddhist-Muslim clashes in June and tens of thousands displaced, prompting rights groups to warn of a humanitarian crisis.

More than 50,000 Muslims and up to 10,000 Buddhists are thought to be displaced across Rakhine state, where people from both communities were forced to flee as mobs torched entire villages in June's flare-up.

The stateless Rohingya have long been considered by the United Nations to be one of the most persecuted minorities on the planet.

Viewed as illegal immigrants from neighboring Bangladesh by the Myanmar government and many Burmese -- who call them "Bengalis" -- they face tight restrictions on their movements and limited access to employment, education and public services.