Report: Owner of Stolen Booby-Trapped Car May Be Key to Hasan Murder Investigation 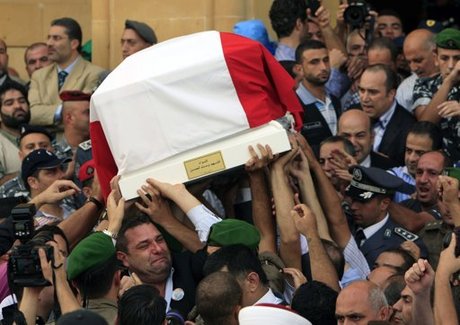 Security information revealed that the owner of the stolen car that was booby-trapped in the bombing that killed Hasan on Friday has been identified.

Security sources told the daily however that the owner of the car is unlikely to be linked to the murder, adding that thief has several arrest warrants against him.

After stealing the car, the thief then may have sold it to whoever committed the assassination, said the sources.

The thief himself may have been involved in the crime, they added.

The stolen car, a Toyota RAV4, was owned by a resident from the town of Qabrshmoun in Mount Lebanon and was reported to have been robbed about a year ago.

After it was stolen, the owner received several telephone calls from the culprit demanding money in return for the car, but he refused.

The thief told the owner that if he ever changed his mind, he should contact him through the phone number that he has been calling him from, which is a Lebanese line, added the daily.

The Central News Agency reported on Monday that Hasan had arrived in Beirut from Berlin at 7:00 p.m. on Thursday.

He made a stop in Paris where he visited his family before returning to Beirut.

He had not informed any members of the ISF of his France trip.

Upon his arrival in Beirut, he contacted Charbel to discuss security matters.

Hasan then headed to his apartment in Beirut's Ashrafiyeh district using a rented car, while a decoy convoy headed to the ISF General Directorate.

The assassination took place on Friday afternoon when Hasan decided to leave the apartment using the same rented vehicle.

The booby-trapped car had been parked in the area hours before he left the apartment.

A widely-informed source meanwhile told As Safir newspaper Tuesday that the Intelligence Bureau has obtained the telecom data over the phone calls that Hasan conducted hours before his assassination.

They include the moment he arrive in Beirut on Thursday and until the time of the bombing shorty before 3:00 p.m. on Friday.

Soon after the blast, the source said that ISF chief Ashraf Rifi had ordered the Intelligence Bureau to provide him with the information about the bombing to determine whether anyone had been targeted.

He then tried to contact Hasan who was supposedly still in Paris with his family and he took the slain security chief's closed line as a sign that he was in fact still abroad.

At around 4:00 p.m. however Rifi received a telephone call from former Premier Saad Hariri who asked him if he had inquired about Hasan's safety after the blast to which the ISF head replied that he was abroad.

Hariri then revealed that Hasan had in fact contacted him on Friday morning, informing him that he was in Beirut.

Rifi immediately sent the team charged with Hasan's security to the scene of the Ashrafiyeh blast in order to determine if he was targeted.

The team returned shortly before 5:00 p.m. with Hasan's wristwatch, which confirmed that he was the target, said As Safir.

The source told the daily that Hasan was likely not only being monitored in Beirut, but in Berlin and Paris as well.

Investigations are now focusing on the people he communicated with by phone, it added.

Rifi meanwhile denied claims that two blasts took place at the scene, saying that the booby-trapped car was parked at the side of the road and it was remotely detonated as soon as Hasan's car passed by it.

A security source told al-Liwaa newspaper Tuesday that “loopholes” existed in Hasan's security precautions, which made his assassination possible.

It said that his security could have been breached through the discovery of his Ashrafiyeh apartment or his rented car or his arrival in Beirut on Thursday.

On the blast itself, the source said that the remote detonation of the bomb indicates that the criminal was not too far away from the scene, adding that such an operation requires three or four people, not 20 as some reports said.

A large number of people involved would raise suspicions over their activity, the source told al-Liwaa.

In addition, it ruled out the possibility that Hasan's car was booby-trapped, saying that the blast was caused by a car parked on the side of the road as indicated by the crater created by the bomb.

On the reasons for the assassination, the source said that Hasan had become a target for his role in the assassination of former Premier Rafik Hariri in 2005, the discovery of terrorist and Israeli espionage networks in Lebanon, and the arrest of former minister Michel Samaha in August.

Samaha was arrested on charges of forming a criminal gang aimed at carrying out attacks in Lebanon at Syria's behest.

Upon the arrest, Hasan and Rifi received intelligence reports that they had “crossed red lines” in their acctions, said the source.

“The two security officials responded by saying that red lines to them are the Lebanese people's security, meaning that they reject the warnings,” it added.

Check the immigration officer at Beirut airport, who most likely helped to report his arrival from Paris. Many of the Hezbollah supporters work there.

ft, wrong as usual...Mohammad El Hout is a civilian that works for MEA...but we all know who control the security and intelligence of the Airport..take a guess ft? yes HIZABLLA...

msefar, khatto msakkar...
The guy is the head of the intelligence bureau, and he cannot be reached because he is abroad, doesn't have roaming, and cannot get a line there. seriously?

Big things happens because small things are allowed to happen.
The thief of the stolen car, gave his number to the owner of the car... and they couldn't arrest him !!!!!
Failing to stop these little things make it easier for big things to happen.

so i read that the FBI is coming to help with the investigation...why on earth would we accept that? so here we are again..if the investigation leads to syria and hizbullah, they will deny it under the pretext that it was an Israely controled investigation through the FBI...and if it was the Israelies, the FBI will cover it up...
can t we do anything by ourselfs...ofkorth we cannot

kamal1, what do yousay if we ask Hizballa to investigate these terrorist crimes!!! funny

"how can anyone kill in real time using such complex logistics but Hezbollah?"
Did you ever heard about a criminal state called Israël?

i said do it by ourselves...we didnt need anybody's help to uncover the samaha plot or the isrealy spy cells ( maybe we did but we kept it a secret) why announce to the world that fbi is coming and make it easier on the guilty to play the israel card...think my friend

What Kind of Investigation is this? now we will never catch the killers. This Lebanese Government is weird. Don't you think that the killers will do whatever now since you have identified the car.... What a tip to the killers to cover everything...

The whole government is traitors.. to Lebanon... All must go.

I am tempted to beleive it is Syria's regime who killed Hassan. But I am more and more convinced of a possibility that this has been done by a dark pro-sunni force because
1- The speed with which sunnite thugs mobilized all over lebanon after 10 minutes from the news about Hassan is suspect. These thugs are being controlled by somebody. I dont buy the argument "anger of the sunni street". Someone is controlling them.- IF IT WAS ANGER IN THE SUNNI STREET, WHY WOULD PALESTINIANS BE INVOLVED? why would palestinians care about al Hassan- a truly patriotic lebanese figure???
2- The crime benefited most al qaeda/islamists in syria. If lebanese government falls or is discredited, or if sunni/chia fight in lebanon, they are the ones who will benefit- A regime change in Lebanon towards M14 would be a great help to FSA.

yes in your logic a man investigating against two syrian officials would get killed by those who oppose them too? what a logic... as if you have forgotten the long list of syrians killings in lebanon as soon as someone represents a threat to them, strange no?

@peace. I am naturally inclined to think that most assassinations in Lebanon are due to Syria's regime, the neo stalinist assad and his gang.
However in this particular case, the thought is nagging me: it is too simple- the airport argument, the number one ennemy of syria argument make it look like a setup. The quick mobilisation, the motive of extremist sunnis to get lebanese moderates anti HA....
I still say it is probably syria, but the other side looks logical

"...the Intelligence Bureau has obtained the telecom data over the phone calls that Hasan conducted hours before his assassination."

Damn! You mean jerk-minister Sehnaoui and boss Aoun are not protecting the privacy of the average cell-phone user anymore? Someone call HRW or Amnesty International...

"...the Intelligence Bureau has obtained the telecom data over the phone calls that Hasan conducted hours before his assassination."

Damn! You mean jerk-minister Sehnaoui and boss Aoun are not protecting the privacy of the average cell-phone user anymore? Someone call HRW or Amnesty International...

BTW, I've see ths movie beforem they will catch NO ONE.

Let the investigation take place and time will tell. The killers will be found sooner or later. It's difficult not to connect the dots which lead to Smaha's arrest and Syria's exposure like never before in previous assassinations or attempts, but let's wait and see. As for my fellow HA and Aouni followers, do you really believe that M14 would assassinate Al-Hassan (their own guy who embarrased Syria with uncovering the Smaha led BOM plots).......you are pathetic....I dont' know if I should disregard you as mental retards or feel sorry for you if you really believe that......JUST SAD

What everyone fails to realize is the fact that it takes days and weeks of planning to setup a booby trapped car and eensure that it can be parked in the rught spot. Not hours or minutes. This is a highly sophisticated job that by the sound of it seems like it was being planned way before Wissam came back . I cant beleive that he arrives the night before and suddenly the next day a booby trapped car is parked and ready for him with pnpoint accuracy.Lets wait for the investigation eventhough I have no faith that anything will come out fo it since we havent been able to resolve any of the assasinations to date.

and who is specialized in stealing cars and asking for a ransom to get it back? ...

Also lets not forget that maybe he was located based on the GPS on his mobile that was probably being monitored and therefore they new he returned when he placed the first call from the airport. This is all assumimg that they knew his cell phone number and were monitoring it.