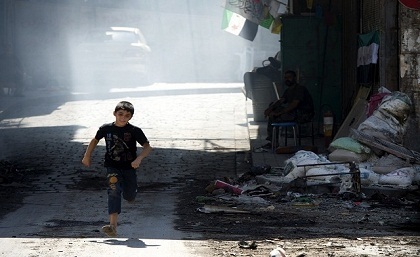 Warplanes raided a district of the northern city of Aleppo as fighting across Syria kept up unabated on Tuesday, despite hopes of a ceasefire for later this week, a watchdog said.

The latest violence comes three days ahead of the Muslim feast of Eid al-Adha, during which peace envoy Lakhdar Brahimi has proposed a ceasefire.

In Syria's second city Aleppo, a rebel was killed in fighting, which was taking place in several districts, while planes bombed the Katergi quarter, the Syrian Observatory for Human Rights said.

In the Damascus provincial town of Harasta, at least two rebels were killed, the Britain-based group said.

In the capital itself, security forces carried out searches in the Zahira quarter, where gunfire could be heard. Overnight, one man was killed in a bomb attack on the southeastern outskirts of Damascus.

The Observatory also reported fighting in the eastern province of Deir Ezzor and in Daraa, southern Syria.

"Neither the rebels nor the regime appear to want a ceasefire, and the daily death toll continues to exceed 100," Observatory chief Rami Abdel Rahman told AFP.

More than 34,000 people have been killed in the rebellion, which began in March 2011, according to the Observatory.