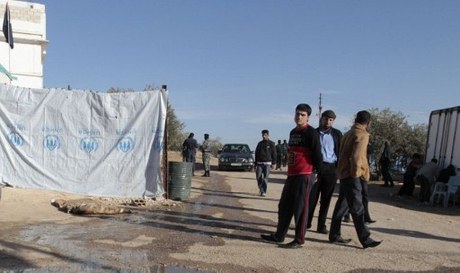 A group of angry Syrians set fire to their tents in protest at "bad living conditions" at the Zaatari desert refugee camp in northern Jordan, a leading charity said on Tuesday.

"A number of Syrian refugees torched 20 tents last night, protesting bad living conditions in Zaatari and demanding the authorities replace tents with caravans," said Zayed Hammad, head of the Ketab and Sunna Society, a charity that helps hundreds of thousands of Syrians in the kingdom.

"Police did not make any arrests and no one was hurt. I think Syrian regime supporters did this in an attempt to create riots inside the camp," Hammad told AFP.

But Anmar Hmud, a government spokesman for Syrian refugee affairs, said without elaborating that "one tent caught fire because of some children who were playing."

Riots and clashes erupted at the camp earlier in October and have occurred several times in the past two months as Syrian refugees repeatedly complain of bad conditions, dust and lack of electricity.

Jordan says more than 200,000 Syrian refugees have crossed into its territory since the conflict in neighboring Syria erupted in March last year.

U.N. figures show more than 85,000 refugees have registered in Jordan, with another 36,000 awaiting processing.

In a case like this, if I were the Jordanian Government, I'd take all these people and throw them back across the border.
No matter how bad they claim the conditions are in the camps, they must still be better than those existing in Syria, otherwise they would not have left their homes in the first place

selfish zionist. With lack of humanity like that, of course your people will never find peace.

Firstly I don't see where you get the first idea. Why is it that always someone whose opinions you don't agree with are automatically Zionists.
Secondly how can a Lebanese (presumably) have the right to talk about conditions in refugee camps in other countries, when we read all over the world of the way your government has kept Palestinian refugees in camps, such as Ein el-Hilweh, for over 60 years.