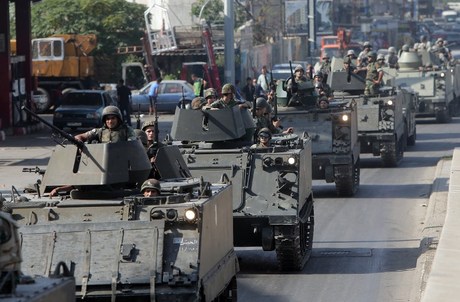 The army deployed on Tuesday in Syria Street, the frontier between the rival Tripoli districts of Jabal Mohsen and Bab al-Tabbaneh, as a ceasefire was declared following three days of clashes in the area that left 11 people dead and 39 others wounded.

“All gunmen have left the streets and internal alleys” in Bab al-Tabbaneh and Jabal Mohsen, a security official told Agence France Press.

Army units reopened all the streets in the two neighborhoods, the official added.

Earlier on Tuesday, sniper fire killed a woman in Jabal Mohsen as a man from the same neighborhood succumbed to wounds he had sustained on Monday.

The clashes were sparked by the assassination on Friday of Intelligence Bureau chief Maj. Gen. Wissam al-Hasan in a powerful car bombing in the Beirut district of Ashrafiyeh that also killed his bodyguard and a civilian woman and wounded more than 100 people.

“Security in the city of Tripoli is a red line,” said Kabbara, reciting a statement issued after a meeting for Tripoli's dignitaries at his residence.

The conferees called on the army and security forces to “fully practice their role in restoring security, preventing any violations and creating a safe environment in the city, especially with the advent of the Eid al-Adha holiday.”

They stressed that “any security chaos does not serve the cause of the sovereign forces, but rather the interests of those plotting against Lebanon."

"The army will restore security and we urge Tripoli's residents to fully comply with security forces and deal with things wisely, because security forces will start erecting checkpoints in Tripoli and staging patrols to arrest anyone who disrupts security," said the statement.

The rival districts have been gripped by frequent fighting between pro- and anti-Assad supporters as tensions spilled across the border from Syria, reflecting a split between Lebanon's parties where the March 14-led opposition backs the revolt in Syria, while a ruling coalition led by Hizbullah supports the Damascus regime.

The Army Command on Tuesday announced that army units arrested around 100 gunmen, including 34 Syrians and four Palestinians, in a security sweep in Beirut and Tripoli.

“Army units deployed in the areas that witnessed unrest over the past few days continued implementing the security plan laid out by the Command to suppress the presence of gunmen on the streets and confront any shooting, rioting or attacks against citizens' properties,” the Army Command said in a statement.

“These units continue to raid the hideouts of the gunmen in Beirut and Tripoli in order to restore full calm in the two cities,” it added, revealing that “around 100 gunmen were arrested, including 34 Syrians and four Palestinians.”

“A quantity of weapons, ammunition and military gear was seized, while 15 army troops were wounded by the armed men's gunfire, including two officers,” the statement added.

The Army Command stressed on Monday that Lebanon's security is a “red line” and that it will take strict measures against all those who are targeting security.

All these red lines ! I wonder what the Alawi's plans are for the future when Asaad dictatorship crumbles ?

Ceasefire declared! Al-Qaida for March 14 all the way. HURRAH!

They say the "sunni street" is upset? If it was really the sunni street, why would it be 38% non lebanese? The whole thing is a plot by some nouveau riche sunni fundamentalist cheikh in qatar or saudi. A Hezbollah hater who is creating strife, the same guy that led to the arab spring.
And naharnet, please dont remove my post anymore. I have the right to say my opinion.

a bunch of syrians and palestinians and u say saudi or qatar....HA HATERS....listen dude naharnet gets rid of ur comments cuz they make no sence....more like a syrian plot to bring lebanon down buddy.....bashar al assad did once say in 2005 that lebanon is gonna burn....check it out

The army should leave them kill eachother..

Sunnis in Lebanon do not have a majority or the firepower to impose their will so they & their March 14 allies play political games to try and impose a minority government in Lebanon. This aligns with the interests of the United States ,Israel and Saudi Arabia who just by coincidence are trying to depose Assad in Syria. Whether Assad is eventually toppled or leaves by his own decision, March 14 will not have the votes to govern. Then Isreal will almost certainly attack Hezbollah. There will be more war and even worse instability. This is what Israel,Saudi Arabia,The USA, NATO & Qatar want. Get use to it and quit complaining. It is your Fate. Well, you could open your eyes and start using your brains but we all know that is not going to happen. Good Luck! May Eid al-Fitr be peaceful.