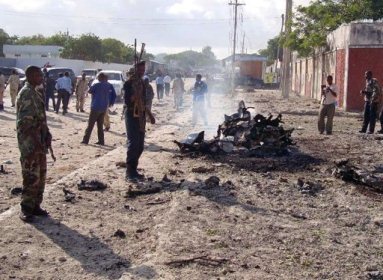 At least six civilians were killed in war-ravaged Somalia after their bus was hit close to the frontline with al-Qaida-linked Shebab fighters, witnesses said Thursday.

"Six people including two women were killed, and at least five others were seriously injured when a big explosion hit their minibus," said Hassan Yahya, a witness.

"I saw four of the dead bodies, one of them was my cousin... we don't know who fired the shot," said Mohamed Abdirahman, another witness.

African Union troops alongside pro-government forces have pushed some 120 kilometers (75 miles) northwest of Mogadishu to the small village of Lego, as they seek to open up the road from the capital to the key town of Baidoa.

"There was fighting between the AU forces and the Shebab... and the bus drove into the middle ground between them," Yahya added, saying the incident took place late Wednesday near Lego.

Somali military official Adan Warsame confirmed civilians had been killed but could give no further details.

"There was heavy fighting in the area, and we have reports a bus drove through the war zone, and there were casualties," he told Agence France Presse by telephone.

AU forces alongside government forces are fighting the Shebab to secure control of the key road that links Mogadishu with Baidoa, a strategic town seized from the Shebab by Ethiopian troops in February.

Baidoa, located 250 kilometers (155 miles) northwest of Mogadishu, was the seat of Somalia's transitional parliament until the extremist Shebab captured it three years ago.

While the hardline gunmen have now lost control of a string of towns in recent months, they still control large areas of rural southern and central Somalia.