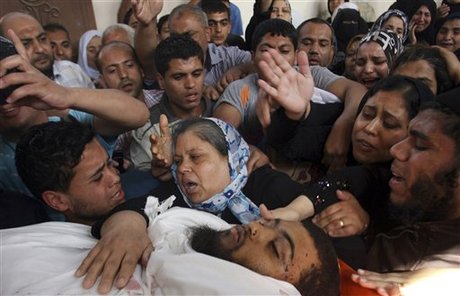 A militant died on Thursday of wounds sustained in an Israeli raid a day earlier as calm returned to the skies over Gaza after a truce took hold, ending 72 hours of bloodshed.

As Gaza began preparing for Eid al-Adha, which starts Friday, medical sources said 24-year-old Ahmed Hrzalla, a militant with the Popular Resistance Committees (PRC) who was severely wounded in an air strike in Rafah, died of his injuries.

His death raised to eight the number of militants killed in the flare up, four of them from Hamas' armed wing the Ezzedine al-Qassam Brigades, and three from the PRC. The affiliation of the other dead militant was not immediately clear.

Over the three-day period, armed groups pounded Israel with more than 100 rockets -- more than 70 of which were fired on Wednesday alone, leaving two Thai workers severely injured.

Following a quiet night in which there were no reports of Israeli raids or militant rocket fire on southern Israel, schools reopened in southern Israel and Palestinians went back to work.

During the morning, the military said one rocket hit an open area without causing injuries or damage, but it had no knowledge of three rockets being fired shortly after dawn, as claimed in a statement by the Gaza-based Mujahedeen Brigades.

And the Erez crossing between Israel and Gaza was reopened, as was the Hamas-run checkpoint leading to the border in the northern Gaza town of Beit Hanoun, officials said.

Late on Wednesday, Israeli and Palestinian officials told Agence France Presse that an Egyptian-brokered ceasefire would go into effect at midnight (2200 GMT).

The agreement was aimed at ending an eruption of bloodshed which began on Monday morning when two militants were killed in twin air strikes on north Gaza which were launched as armed groups fired at Israeli troops who had crossed the border.

A third militant died later in the day in disputed circumstances, with the Palestinians blaming another air strike and Israel saying it had not staged any raid.

On Tuesday morning, several hours before a top-level visit by the emir of Qatar, an Israeli soldier was severely wounded by a roadside bomb during a routine patrol along the fence in central Gaza in an attack claimed by militants from the Popular Front for the Liberation of Palestine.

After a quiet day, militants fired six rockets over the border, and in response Israeli aircraft killed two Hamas militants in raids on northern Gaza, prompting a further wave of rocket fire.

On Wednesday morning, an early strike on the southern city of Rafah killed a PRC militant and seriously wounded another.

And later in the day, medics said another Hamas militant died of wounds sustained in one of the Tuesday evening raids.

"Hamas will receive its punishment for what has happened here," Israeli Defense Minister Ehud Barak said Wednesday, and Prime Minister Benjamin Netanyahu also warned that any continuation of rocket fire would prompt a "much more extensive" Israeli response.

Gaza's Hamas government issued a statement "condemning the Zionist aggression against the Gaza Strip," and warning of its consequences.