Syria Army, Rebels Agree to Eid Truce, But Will Respond to Attacks 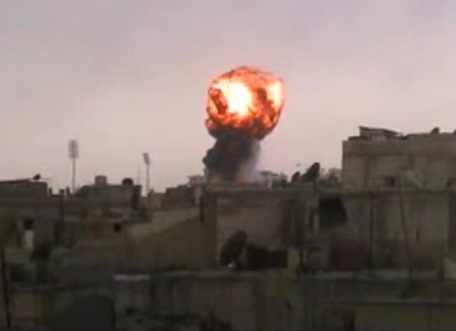 Syria's army and main rebel force said they will cease fire on Friday, in line with an internationally backed truce during a Muslim holiday, but both reserved the right to respond to any aggression.

A peace initiative by U.N. and Arab League peace envoy Lakhdar Brahimi calls for a truce during the four-day Muslim holiday of Eid al-Adha from Friday marking the end of the hajj pilgrimage.

It was backed this week by the United Nations Security Council, and a spokesman for U.N. chief Ban Ki-moon said "the world is now watching" to make sure both sides stick by their commitment.

The army announced it would adhere to the ceasefire in a statement read on television.

"On the occasion of Eid al-Adha, military operations will cease on Syrian territory as of Friday morning, until Monday the 29th," it said.

But it also said the army would react if "armed terrorist groups continue to fire on civilians and government troops, attack public and private property and use car bombs and improvised explosive devices."

It also warned of a response if rebels "strengthen their current positions or continue to receive reinforcements and ammunition" and to any fighters crossing from neighboring countries.

The Free Syrian Army, chief among many rebel groups battling President Bashar Assad's forces, responded positively soon afterwards, saying it too would lay down its weapons as long as regime troops adhere to the ceasefire.

"We will respect the ceasefire from tomorrow morning if the Syrian army does the same," said General Mustafa al-Sheikh of the FSA, which had previously said it doubts Damascus would stand by any commitment.

"But if they fire a single shot, we will respond with 100. So we reserve the right to respond," he said by telephone from Turkey.

He cautioned, however, that he could not speak on behalf of all rebel groups.

"There is not a unified command for all the factions. We speak on behalf of a big enough number of fighters, but there are other armed factions who follow other commands," Sheikh said.

If the latest one holds, it would mark the first real breakthrough in halting -- even temporarily -- the 19-month conflict that rights groups say has killed more than 35,000 people.

Eid al-Adha starts with prayers at dawn on Friday, expected at around 5:30 am local time in Syria, or 0230 GMT.

Shortly before Thursday's announcements, there were no signs of a slowdown in the fighting, with rebels moving into a strategically important Kurdish neighborhood in the main battleground city of Aleppo.

Residents in Aleppo's Ashrafiyeh district said about 200 rebels had moved in to the area for the first time.

One said the rebels, who arrived on vehicles mounted with heavy machineguns and bearing the markings of the Liwa al-Tawhid main rebel unit, made it clear they were settling in for Eid despite the ceasefire promises.

"Snipers have set up in the buildings and 50 armed men, dressed in black and wearing headbands with Islamic slogans, entered a school near me. I heard them tell the residents: 'We are here to spend Eid with you'," he told Agence France Presse.

Rebels and troops were also battling in the mainly Christian district of Seryan just south of Ashrafiyeh, said residents.

At least 100 people were killed as violence continued across Syria on Thursday -- 43 civilians, 37 soldiers and 20 rebels, said the Syrian Observatory for Human Rights.

Fierce clashes raged around the Wadi Daif military base between troops and rebels, including fighters from the jihadist al-Nusra Front, while the army shelled the strategic town of Maaret al-Numan nearby, said the watchdog.

Al-Nusra, which has claimed several deadly suicide bombings against the Assad regime, is among the other armed opposition groups that have already refused to accept the ceasefire, labeling it a "trick."

The United States also voiced skepticism, with U.S. envoy to the U.N. Susan Rice saying many would doubt the regime's word "given Assad's record of broken promises."

Still, Brahimi stressed that "if we succeed with this modest initiative, a longer ceasefire can be built" that would allow the launch of a political process.

Brahimi said he wanted the ceasefire to help create political space for dialogue and for aid to flow in, particularly to Aleppo, Homs in the center and Idlib in the northwest.

And the U.N.'s refugee agency said it was ready to send emergency aid to thousands of Syrian families in previously inaccessible areas if the ceasefire holds.

The international community boosted pressure on the regime, meanwhile, with U.N. rights investigators saying they would go after senior officials responsible for atrocities.

Former war crimes prosecutor Carla del Ponte, who joined the U.N. Commission of Inquiry on Syria last month, said that without a doubt "crimes against humanity and war crimes" were being committed in Syria.

Del Ponte said she was focusing on determining "the high-ranking political and military figures (responsible for) these crimes".

How many cease fires did this same Syrian army agree on in Lebanon in 1989 on the same Arab League peace envoy Lakhdar Brahimi's watch only to break it accuse the Lebanese army.

I don't know if it's just me or if perhaps
everybody else encountering problems with your blog. It seems like some of the text on your content are running off the
screen. Can somebody else please provide feedback
and let me know if this is happening to them too? This might be a problem with my web browser because I've had this happen previously. Appreciate it

Give each other a break to have a fiercer battle later!

That's what Bacho wants. He wants the opposition a bit stronger to keep on fighting and destroy his own country and buy some more time to live!
Buying time has always been the policy of the Baath snake!