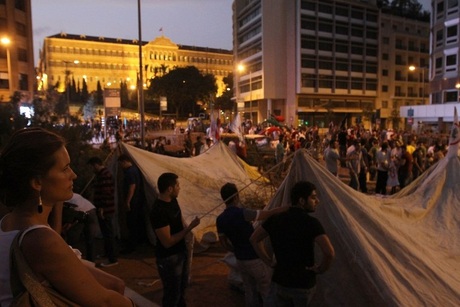 A clash erupted on Thursday evening between security forces and protesters from the March 14 youth organizations at the site of the open-ended sit-in demanding the departure of the government at the Riad al-Solh Square in downtown Beirut.

But Parliament Police issued a statement saying its members had nothing to do with the incident.

OTV quoted Speaker Nabih Berri's sources as saying that “Parliament Police had nothing to do with the clash that was caused by one of the protesters.”

Protesters at the scene said a 17-year-old comrade was transporting three car tires on a motorcycle to use them to bolster up the tent erected by the National Liberal Party in the face of wind and rain.

“One of the tires slipped by accident and rolled towards the metal barrier erected by the army. When the young man approached the barrier to retrieve the tire, he was intercepted by a number of army troops and Parliament Police, who beat him up severely,” protesters said.

Go home, get an education, get a job and thats how you win your country. Not by sit down, smoke hookah and drink all night. You are waisting your time. Its a shame that Lebanon got to this point.

they are educated ,you are not

FT every person has the right to protest ..did you forget your M8 lock down of Beirut few years back

Your disciplined "Sit in" / Camping laster 18 months. Blocked the governement, blocked parliament for exectuting their tasks. Paralysed the country. Ruined the economy ... and achieve absolutely nothing positive.

M8 leaders are a cancer that slowly spread throughout the country and kill it slowly but surely !

M8 want power but for what ? For what plans ? What vision ? you say no to stuff but havent proposed a solution to anything !

"Not by sit down, smoke hookah and drink all night"

hahaha! so M8 blocking the parliament and institutions for over than a year was normal, some M14 people do the same it is not! hahaha! M8 double standards as usual...
in both cases they are stupid! but just be fair and also criticize M8 for having set the bad example as berri pointed out!

"Shootingstar"...LOL...An education? You misspelled "wasting"...."Not by sit down" isn't proper English. "It's" is a contraction, "Its" is a possessive adjective or pronoun. I suggest you get an education before you lecture others.

No that's how u get a ticket out of this place... It's a joke now, no matter what u do the fact remains: nothing will ever b achieved. The man in charge of security was blown up. Realy now?

Do you think it is that wrong to demonstrate peacefully? What is at stake is democracy. There has been a systematic elimination of one of the political forces in this country i.e. M14. All Lebanese including M8 should demonstrate as political plurality is in danger in this country.

Your M14 Wahabi is pure propaganda to justify your position. Do you think really that M14 is vehiculating Wahabi's value in this country. Have you ever heard of M14 shouting to stop bars in Beirut?
When you have against you political forces backed blatantly by weapons, money, moukhabarat and pasdarans, well you need to go and get the help of countries that can support you, be it the US, France, or Saudi Arabia.

advanced lifestyle is measured by the capacity of the people to enjoy peace, have fun and leisure time...in a country that preserve civil peace for everyone, and where all the parties obey the laws!

the contrary of what M8 aspires for...

funny to see how those M8 guys use this to make a big fuss about it when only one protestor is at the origin of this clash! they want to make believe that downtown was under attack LOL! just to fit their stupid propaganda...

just like the guy in tarik jdideh: a journalist from el manar was at the origin of the rumour just to make people hate sunnis from their and believe they are evil salafis....