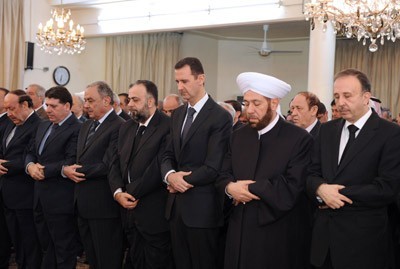 Deadly car bombings and artillery fire on Friday shattered a fragile truce between the warring parties in Syria just hours after it had begun on the first day of the Muslim Eid al-Adha holiday.

State television blamed "terrorists," the regime term for rebels, for a car bomb attack in Damascus that killed at least five people and wounded dozens, and a rights watchdog reported another deadly bombing farther south in Daraa.

Rebels accused regime forces of opening up with artillery in the embattled north, where the Syrian Observatory for Human Rights said fighting erupted near the key army base of Wadi Deif.

The army said it was responding to attacks by armed rebels that violated the truce agreed to mark Eid al-Adha, one of the most sacred holidays in Islam, which started at dawn.

U.N. and Arab League envoy Lakhdar Brahimi had brokered the ceasefire in the hope that if successful, it could lead to a longer cessation of violence.

President Bashar Assad's forces and main rebel group the Free Syrian Army (FSA) had both agreed to a call by Brahimi to lay down their arms for the four-day Eid, but both also reserved the right to respond to attacks.

"Our valiant armed forces are responding to these violations and pursuing these groups," it added.

An FSA commander in the northern city of Aleppo accused the regime of breaking the pledge to stop firing.

"The regime does not respect the ceasefire, it is not shooting and there are no clashes but it has started shelling... What ceasefire? We can't trust the regime," said Abd al-Jaber al-Akaidi.

"The regime is perfidious, a cheater and a liar."

The rebel jihadist group al-Nusra Front, which has claimed responsibility for deadly car bombings in the past, had refused to sign up to the ceasefire.

As the day progressed it became clear there had been little let-up in the violence.

The Britain-based Observatory reported car bombings in Damascus and in Daraa, cradle of the anti-regime revolt that has become a fully fledged uprising since it first erupted in mid-March last year.

The watchdog said the a car bomb blew up outside the Omar bin Khattab mosque of the Daf Shawk district in southern Damascus, killing five people and wounding more than 30, adding that children were among the casualties.

A security source told Agence France Presse the bombing had targeted residential buildings for police officers and their families, and that children were playing in the area when the blast occurred.

In Daraa, three soldiers were killed and eight wounded when a car bomb exploded near a military checkpoint and the railway station, the Observatory said. Eight troops were wounded, most of them critically.

The Observatory said the truce had "collapsed" in several regions and gave a death toll of 61 on Friday, a day after 135 were reported killed, adding to an estimated death toll of 35,000 people over 19 months of conflict.

Observatory director Rami Abdel Rahman reported fighting in various parts of Syria, including in and around Damascus, in second city Aleppo, in the central city of Homs and near the Wadi Deif base in the northwest.

At least 10 soldiers and four rebels were killed at Wadi Deif, the watchdog said.

The Observatory relies on a countrywide network of activists and medics in civilian and military hospitals, and says its tolls take into account civilian, military, and rebel casualties.

In Aleppo, scene of fierce fighting since mid-July, there was a brief morning respite and children playing in the streets of some neighborhoods, an Agence France Presse reporter said.

Some families also ventured out to check on their homes on the front line, taking advantage of the lull, the reporter said.

Residents reported clashes at mid-day after rebels tried to overrun a checkpoint near the Mohasab army base in the northeast Seryan district, and in the Sheikh Maqsoud area between Kurdish militias and rebels.

Shams, a mother in the city's army-controlled Sabil district, said the ceasefire "is only a political phrase and not a reality on the ground."

Brahimi had hoped a temporary truce could lead to a more permanent ceasefire during which he could push for a political solution and bring aid to the most stricken regions.

After clashes late Thursday, the ceasefire began as morning prayers marked Eid al-Adha, the Feast of Sacrifice capping the end of the annual hajj pilgrimage to Mecca.

The truce was also tested as security forces opened fire to disperse anti-regime protests after prayers at Inkhel in Daraa, wounding three people, the Observatory said.

General Mustafa al-Sheikh of the FSA said the rebels considered the protest crackdown a violation of the ceasefire, but they were not planning to respond.

The leader that is making every effort that Assad's regime shines tyrannically in the region.

Look at the mass murderer praying. Maybe he is hoping God won't notice what he has done.

Meshaal angered Damascus by praising "the revolution of the Syrian people for freedom and democracy" ...

i guess your hamas friends you ll call them wahhabis too while supported by iran?

And the khamenei/she3a instinct is about peace lol? evidenced by all the people they killed in lebanon starting with the arab she3as of amal movement in the 80's and ending with scores of politicians in the 2000's, not to mention the atrocities they are committing against the syrian people. ba3dain who builds a peaceful nuclear plant underneath a mountain? that is literaly what dr. evil did in austin powers lol. Idiots like you are gona keep stirring the pot until they bring death/destruction to lebanon.

This mosque looks like a small living room, just how scared is this boy bashar is lol?

Iran and Syria regime are responsible of so many dead so how can you say that the FSA instinct is to kill. You cannot deny the Syrian people right to live without tyranny. Now unfortunately all kind of salafists and terrorist have found a playground in Syria to express themselves and they are stealing the revolution from the Syrian people. Now a cease fire is not easy to implement especially that the FSA is not centralized. Remember how difficult it was to implement a cease fire during the war in Lebanon.