Qabbani: We Won't Allow Govt. to Be Toppled through Street Action 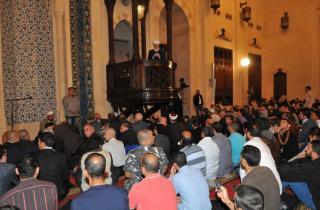 Grand Mufti Mohammed Rashid Qabbani stressed on Friday that the “premiership in Lebanon should not be targeted with violence.”

He said: “We will not allow the government to be toppled through street action.”

He made his declaration during the Eid al-Adha Muslim prayers in Beirut's Amin mosque.

“Those inciting instincts in the name of sects for political purposes are being foolish,” he added.

“Lebanon is a country of principles, peaceful democracy, and state institutions and we therefore cannot accept that the government be overthrown through the street,” said the mufti.

“We didn't accept this years ago and we will never accept it,” stated the Sunni cleric.

“The premiership is a symbol for us and all the Lebanese people,” he added.

“Abandoning the constitution means the destruction of the republic and country,” Qabbani stressed.

Addressing the Lebanese people, he said: “It is time to impose new rules of action and eliminate the sectarian germ in order for your sons to enjoy hope in the future.”

Commenting on the assassination of Internal Security Forces Intelligence Bureau chief Wissam al-Hasan, he said: “The crime is part of a conspiracy against Lebanon.”

“It will not destroy our national unity,” he remarked.

Hasan was killed on October 19 in a car bomb in Beirut's Ashrafiyeh district.

The opposition has also been demanding the resignation of the government, which is comprised of pro-Syrian allies, to resign in wake of the assassination.

It announced its suspension of any political activity, including the national dialogue, that includes the government.

You are one of those stirring sectarian strife with such comments.
government institutions should represent all Lebanese and not a particular secte.
same goes for the presidency and the parliament.
spare us yur comments and do what you are supposed to do: pray.

The mufti does not like Hariri and is as such is taking this stance. Wow.

He should instead play his role of a religious leader and call for calm, efforts and means to achieve understanding among all Lebanese.

Must be the old age that is talking. This government was elected by the gun and it should go out also in uncivilized way. This government is murdering its own leadership on orders by Iran and Syria.

you learned your lesson well from syrian tv and elmanar, good boy rudes...you repeat it perfectly,i ll give you an A+!

which lebanese government is this man remaining loyal to? yes ... its clear... the syrian-iranian-hezbolah government. wonder why? is it threats or bribes or power or ?????

the barking you hear is the echo of your own....

100% agree to not topple government on streets especially in a country like Lebanon. But it is not neither the good solution to shut-up and await the next bombing on a M14 figure, which will be interpreted as a new "test" or "trap" or "sectarian strife" by M8 followers. These are politically motivated murders aimed to eliminate the party either we like it or not. Why just M14 figures are used for this "test" or to ignite civil war? killing from both camps does not? What is the answer of M8 for these precise questions?

Qabbani should stay out of politics. We just need him to tell us when ramadan starts/end and when the eid is scheduled.

Why do religious figures keep interfering in politics?

He will be replaced by another sunni- so what do you care?

March 14, what the heck is going on with Qabbani? First, it was al-Rahi. and now this? Just pray that the Pope does not make Qabbani a cardinal! OMG what would happen to March 14 should we end up with 3 cardinals? Actually, Sfeir cancels out Al-Rahi, but with Qabbani a cardinal, the scale would tip against the lovers of freedom and democracy and the lovers of life!!! Wouldn't you agree? So, get together, warriors, head to the residence of the Vatican ambassador and with one voice shout: No more cardinals. Sfeir is our only cardinal. Down with the fake cardinals. Go. Go. Go. Go. Go warriors. God bless!

You must have some religion in your life or else you start to pretend you are God, and then you really suffer.

religion was made to control the masses and rule over them. it s only a means to get power at the expense of people and frighten them...
look lebanon towards religion just like in the middle ages europe....
and people are proud to follow like sheep whatever a religious man tells them like if their brain stops to work when they enter a place of cult! ...baaah baaah!

"You must have some religion in your life or else you start to pretend you are God, and then you really suffer."
Is it your God that keep you from pretending you're god him (or her) self? Might I suggest you get your brain checked. Take a trip to north Europe and see how harmoniously people live there without religion.

religion should be abolished in lebanese politics--the first step would be to allow civil marriage and remove the stranglehold that these religious figures try to put on society.

and yes, I realize that religion and politics can't be one without the other, but if it doesn't, it will put Lebanon into the dark ages like it did to Europe.