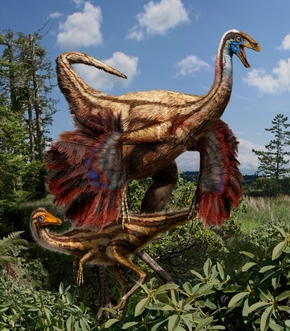 Scientists in Canada have unearthed the first fossils of a feathered dinosaur ever found in the Americas, the journal Science reported on Thursday.

The 75 million year old fossil specimens, uncovered in the badlands of Alberta, Canada, include remains of a juvenile and two adult ostrich-like creatures known as ornithomimids.

Until now feathered dinosaurs have been found mostly in China and in Germany.

"This is a really exciting discovery, as it represents the first feathered dinosaur specimens found in the Western Hemisphere," said Darla Zelenitsky, an assistant professor at the University of Calgary and lead author of the study.

"These specimens are also the first to reveal that ornithomimids were covered in feathers, like several other groups of theropod dinosaurs," Zelenitsky said.

She said the find "suggests that all ornithomimid dinosaurs would have had feathers."

The creatures had a cameo screen appearance in the original Jurassic Park movie in which they were shown being chased by a Tyrannosaurus Rex.

In the movie however they were portrayed as having scales rather than plumage -- which researchers say they now know was not the case.

Francois Therrien, curator at the Royal Tyrrell Museum in Drumheller, Alberta and the co-author of the study, said the discovery revealed another fascinating fact -- the existence of early wings in dinosaurs that were too big to fly.

"The fact that wing-like forelimbs developed in more mature individuals suggests they were used only later in life, perhaps associated with reproductive behaviors like display or egg brooding," he said.