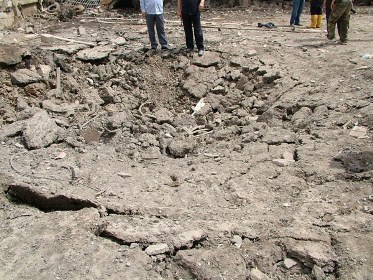 Fighting raged across Syria and an air raid struck near Damascus on Saturday after a declared ceasefire for a Muslim holiday fell apart, with at least 175 killed since it was due to take effect.

The truce for the holiday that started Friday conditionally agreed by the regime and the rebel Free Syrian Army (FSA) had raised the prospect of the first real halt to the fighting after 19 months of conflict.

But after fresh fighting on both Friday and Saturday, rebels and a monitoring group declared the ceasefire well and truly dead.

As clashes between President Bashar Assad's forces and rebels continued, a Syrian warplane struck a building in a rebel-held area east of Damascus that has been the scene of heavy fighting for weeks, killing eight.

"This was the first fighter jet air strike since the declaration" of a truce for the four-day Eid al-Adha holiday, the Syrian Observatory for Human Rights said.

"The truce is dead," the group's director Rami Abdel Rahman commented. "We can no longer talk of a truce."

A rebel commander in the northern city of Aleppo said there was no doubt the ceasefire initiative, proposed by UN-Arab League envoy Lakhdar Brahimi, had collapsed.

"This is a failure for Brahimi. This initiative was dead before it started," Abdel Jabbar al-Okaidi, head of the FSA military council in Aleppo, told Agence France Presse by telephone.

He insisted the FSA had not broken the ceasefire and was only carrying out defensive actions.

"I was on several fronts yesterday and the army did not stop shelling," Okaidi said. "Our mission is to defend the people, it is not us who are attacking."

The Eid holiday had started Friday with a slowdown in the fighting -- and state television footage of Assad smiling and chatting with worshippers at a Damascus mosque -- but quickly degenerated.

The Observatory, a key monitor of the conflict, said 146 people were killed in bombings and fighting on Friday, including 53 civilians, 50 rebels and 43 members of Assad's forces.

On Saturday, fresh violence killed at least another 29 people, the Observatory said, amid clashes and attacks in Damascus province, Aleppo, Daraa in the south and the eastern city of Deir Ezzor.

Among the dead were five killed in a car bomb attack in Deir Ezzor, it said. State television blamed the attack on "terrorists" and said the bomb had gone off in front of a church, causing significant damage.

According to the Observatory, a total of more than 35,000 people have been killed in the conflict, which began as an anti-regime uprising but is now a civil war pitting mainly Sunni rebels against Assad's regime dominated by his minority Alawite sect, an offshoot of Shiite Islam.

The Britain-based Observatory relies on a countrywide network of activists, lawyers and medics in civilian and military hospitals. It says its tolls take into account civilian, military, and rebel casualties.

Assad's forces and the FSA had both agreed to a call by Brahimi to lay down their arms for the Eid, but both also reserved the right to respond to attacks.

Brahimi had hoped the truce might lead to a more permanent ceasefire during which he could push for a political solution and bring aid to stricken areas of the country.

Okaidi, the FSA commander in Aleppo, said the ceasefire had been doomed from the start and that the international community needed to stop putting faith in the regime.

"The Syrian people have become guinea pigs. Every time there is an envoy who tries an initiative, while we know the regime will not respect it."

Don't panic that was only a test.

Yeah, good one you bloody idiots, like it snot half **king obvious that it was bashar & the Iranian idiots who carried out this attack to try and scare the Christians int picking their side. This does not serve the FSA. this serves bashar. Kleb

There is something called Israel guys ..