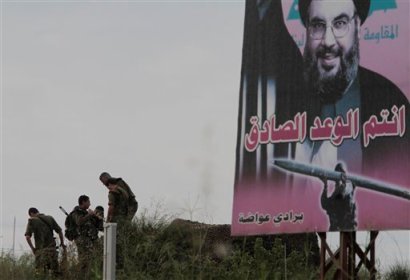 European resistance “makes it harder to defend our countries and protect our citizens,” Brennan said in a speech to the Institute of Institutional and European Affairs in Dublin.

He said that Hizbullah, in addition to its alliance with terrorist activities carried out by Iran, “is training militants in Yemen and Syria.”

Washington already classifies Hizbullah a foreign "terrorist organization" and it is under U.S. sanctions, but in August the Obama administration added Hizbullah to a list of organizations under sanctions as a penalty for supporting Syrian President Bashar Assad's regime.

Scum of the earth iranian proxy.

go back to iran.

Go back to tel aviv. Geha = worshipper of wahhabis.

"who is made of lebanese defending lebanese soil"

...if it is in the interests of iran, don t forget that part too.....coz they don t care about lebanon and never will only for blind FPMers they care!
remember when aoun used to call them terrorists too? now they "defend" lebanon!!! see how blindly you follow....

Come on FT, US have been fighting alquaeda and their donors in sudan, afghanistan, yemen, iraq, etc...
HA is qualified as terrorist not for it resistance activity back till Israel has evacuated Lebanon but for it terrorist activity outside lebanon: egypt, bahrein, argentine, thailand. HA is an extension of the Islamist Iranian regime (I really do not understand how you ever support such a criminal regime that massacred ten of thousands of its own people) and as such is labelled as terrorist.

stupid FT as usual: maybe usa created alqaida to fight back the russians but the day they turned back in the us then they became their enemy..; so your BS pretending that they don t doesnt stand the facts, as usual baby!
other stupidity :" the israeli embassy attack in argentina was in reprisals for the uncondemned killing of hezbollah's previous secretary general in 1992. an eye for an eye."
so they are terrorists, as you admit they did a terrorist act! even if eye for an eye it is terrorism! LOL!
always twisting fact to try and prove he s right when facts prove the contrary, really pityful FT!
and shebaa is blocked by the unwillingness of you master basgar to hand the written documents to the UN... hezbos should ask him if they really wanted shebaa to be liberated instead of selling their BS resistance...!

hizbushaitan is anything but Lebanese. they are traitors sold out to iran executing their orders.
so spare us your BS.

Thanks to HA,the Iranian Syrian axis sponsored by Russia, eager to gain influence in the gulf and east Mediterranean, is polarized in Lebanon. Who will pay a painful price? The Lebanese as usual, and especially the Shia community.

Wake up guys, lets only follow our interest in building a peaceful and prosperous country. Having a militia armed to the teeth, obeying to the orders of external tyranic regimes will lead us to a miserable and sad future.

FT, how on earth can you support HA since it is heavily importing Iran's interest in Lebanon and making pay the lebanese a hefty price for this.

You see we do not want to support no country but Lebanon. We want to support the interest of all the people regardless of the community they belong to. If we do so, then let us benefit from all the countries around us in terms of economical, cultural, educational exchange. Life in Lebanon would be so much better with a future for the youth.

What do we have instead: economic slowdown and our youth traveling away.

May be we could wake up to this in this forum and have constructive exchanges.

"FT, how on earth can you support HA"

easy because his aoun tells him to, he doesn t think by himself but through aoun s brains.... aoun tell the contrary than what he s been saying for years but it doesn t shock him. he ll always find excuses! but those who worked for syria before and are now against? waw! he calls them traitors! flipfloppers!

those cannot change only aoun can LOL ironic isn t it?

oh! FT just educate yourself and read the declarations your aoun made in the press and medias before 2005 and you ll see how he changed. but you are too afraid to reread all that coz your don t want to see how blind and wrong you are, prefering to live in lalaland...

he said and repated that till the assad family will be in power no negotiations would be possible with syria and now he licks their boots!... so shut up and inform yourself baby! that is reality easily verifiable ! but i guess truth hurts you ...

From a pure Lebanese perspective, one could care less whether the EU declares HA as a terrorist organization or not ما بآدم و لا بآخر.
It is their philosophy that is deadly for Lebanon. Theocracy based ولاية الفقيه totalitarian ideology that guarantees keeping the Lebanese in the Stone Age because it refuses to acknowledge the views of others that are different from it's own. It's totalitarian nature denies the basic rights and value inherent in each individual. Even FPMrs, in a rare moment of candor, will admit to the above. This is not Lebanon is like nor the Lebanese. We are freedom loving, forward thinking people who will refuse and resist to the very end HA's attempts to subjugate us in favor of Iran, Syria or any other entity.

Well said. I could add that if initially Khomeiny's Islamic revolution was truly to defend the valued of Islam against the Shah's secular values, the wilayat el Fakih has become a regional power struggle to keep and extend the mullahs' power.

maybe you should look at their actions first and see how tolerant they are of democracy and views inconsistent with theirs before jumping to your conclusion.

@FlameThrower
Go lecture to someone your age or younger sonny. As for me, I've live the Lebanese history personally, read HA's manifestos - including the latest a couple years ago - as well as followed all of their public pronunciations from whence their entity was formed - ذاك اليوم المشؤوم - at one point I also supported Aoun believing him to be a man of principle.
As time passed and I watched it became clearer that HA can no more change their ideology than a leopard it's spots. Your memory seems to work well when it supports your views and fails you when it does not. Hardly the sign of an intelligent Lebanese.

We are just going by what Aoun said about them up until the year 2005 (not in the 80's as you claimed before). And we all know have HA refused to become his allies then he would still have been calling them terrorists (but of course he would have had to hide underground then)

Ft, you mention that economic slowdown is not due to M8 but to bad economic policies of M14. I am sure many mistakes have been done by past M14 governments but how come we had annual growth of 9% on average from 2005 till 2009. Had we had this uninterrupted growth, the national debt and taxe burden would have gone down considerably. Lahoud government stopped back in the 90's the doubling of Deir el Kamar and Zahrani power station ordered by the Syrian to penalize Hariri. We are now paying the price for it. The assassinations of M14 leaders, the threats against arabs from Shia, the meddling of HA in Bahrein we are all paying for it.
Growth needs investors who need stability. M8 sponsored by HA militia obeying no rule of law but its tyrannical masters do not inspire confidence.

However good HA intentions and behavior you may think there is no justification on earth to have a militia armed to the teeth challenging the national institutions in Lebanon and obeying to foreign masters. You can never build a prosperous and peaceful country with this set up.

in a way, you are right--they shouldn't be classified as terrorists. They should be identified as syrian/iranian mercenaries and all sanctions that are the former groups should also be thrown on HA. that is logic that even you can't refute, that is if I held you and others to that standard.

No to resistance--yes to mercenaries.

hezbollah has put aside all the shia clerics that wanted to have a lebanese shism as allowed by their rules...and when nasrallah came they pledged allegiance to iran and thus obeys them...before the secretary general was regularly elected till nasrallah took the power and decreted he ll rule forever!
which clearly shows the iranian nature of hezbollah now! totalitarian, obeying a foreign agenda otherwise they would have stayed independent from iran and live a true lebanese chiism but they prefered wilayat el fakih ! they certainly do not work for lebanon as FPMers pretend....

If it was not for HA, half of the Lebanese would be carrying an Israeli passport, mostly the southern people. Just like in Golan heights.

It is a pity that you can not get your facts right. If you would have checked into it more than half the Syrian Druze residents of the Golan Heights did not take out Israeli citizenship.

Bickering over farcical half-truths and with complete disregard of a hefty portion of the Lebanese population who reject the Persiofascist alliance between FPM - HA - Iran - Syria will get you nowhere. We are proud to never belong to this culture of death; this hegemonic culture of Hizballah and their henchmen who bulldoze their way through power.
Pragmatically speaking, even as a die-hard M14 supporter, I am not entirely fond of the M14 practices and policies but I understand that they were surrounded by several monstrous power-hungry butchering machines in both Syria and Lebanon. Their ongoing struggle is laudable and all of their supporters are full of zeal and spirit and glued together for ONE common goal: sovereignty from ALL foreign entities eating away at OUR civilisation. The arrest of Michel Samaha CARVES the truth in our hearts and minds, the greatest resistance will be next year in the ballet boxes, where HA and their lackeys will suffer yet ANOTHER tremendous loss.

March 14, listen to me, my compatriots. The US labeled Al Qaeda a terrorist organization, and look at them now! Al Qaeda are the best executors of the policies of the US and as a consequence, of Israel, your best friends and allies! Just think about it and apply your keen logic: labeling Hizbullah a terrorist organization will bring them closer to the US and Israel, and as a consequence, closer to you. What better solution to bring all the Lebanese together than this, huh? So get together, warriors, march to the embassies of the EU countries and demand that they label Hizbullah a terrorist organization ASAP. Oh, I forgot to suggest that you add one single precondition, though: DENOUNCE WILAYAT AL-FAQIH NONSENSE. So, get ready, warriors, and go, go, go, go, go, you snake-head eating, evil slaying vampires for peace and the love of life!