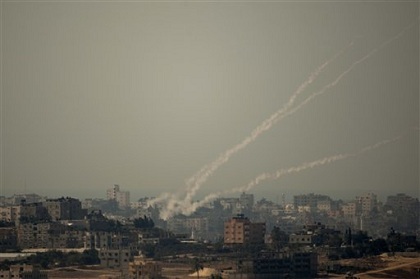 Gaza fighters on Monday fired 18 rockets at southern Israel, ending several days of calm, with the armed wing of the ruling Hamas movement saying it was revenge after an air raid killed one of their men.

It was the second straight day in which fighters had fired rockets at Israel in a confrontation which began early on Sunday, and effectively ended three days of calm after an Egyptian-brokered truce went into force at midnight on Wednesday.

"At least 18 rockets were fired at Israeli territory, without causing injuries or damage," police spokesman Micky Rosenfeld told AFP, saying the count was from midnight.

Monday's barrage of rocket fire followed hot on the heels of two late-night Israeli air strikes which did not cause any injuries, Palestinian security sources said.

Although the Ezzedine al-Qassam Brigades did not say how many rockets it had fired, it named at least five areas in southern Israel where it had targeted "military sites" -- Sufa, Kissufim, Beeri, Yad Mordechai and Nahal Oz.

And it posted a grainy video on their website which appeared to show fighters launching nine rockets in the early morning.

"This shelling was in response to the continuous Zionist bombing and terrorizing of peaceful citizens, which most recently killed Suleiman Kamel al-Qara, as well as in response to the repeated incursions and attacks carried out by the occupation," the group said referring to one of its own fighters.

The firing was the latest show of force from Hamas fighters who have traditionally respected a de facto truce on firing at Israel, but who have in recent weeks, claimed several rocket attacks.

The latest round of tit-for-tat violence began early on Sunday when Israeli troops crossed the border into southern Gaza, prompting Hamas fighters to begin firing mortars at them, Palestinian security sources and witnesses said.

Israel then carried out an air strike which killed Qara and injured another Hamas fighter.

Throughout the day, armed groups then fired seven rockets at Israel, two of which struck the southern city of Beersheva, which is home to 194,000 people, causing schools to be canceled for the day.

Late on Sunday, Israel hit back with two strikes on northern and southern Gaza, causing damage but no injuries.

Palestinian witnesses and security sources confirmed the raids, saying one house was destroyed but no-one was injured.

Army statistics say armed groups have fired more than 160 rockets at Israel since the start of October.

The Egyptian-brokered ceasefire, which went into force at midnight on Wednesday, was aimed at ending 72 hours of bloodshed in which Israeli air strikes killed eight fighters, and armed groups fired more than 100 rockets at Israel, severely wounding two Thai workers.

That round of violence, which began on October 22, also began when fighters opened fire on troops who had crossed the border into northern Gaza, prompting several deadly air strikes.

So this is the cease-fire that Hamas agreed to last week.
Mind you it did last longer than the Syrian one.