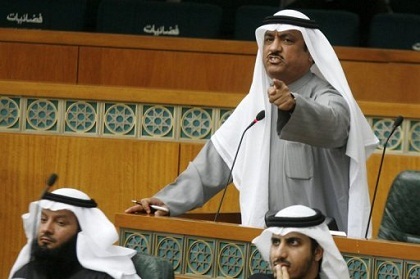 A Kuwaiti opposition figure said he has been summoned for questioning after allegedly criticizing the emir on television, as the Gulf state widened a crackdown on dissent.

"I will go to the public prosecution (on Wednesday) for interrogation on the accusation of undermining the status of the emir in a televised interview in August," former Islamist MP Faisal al-Muslim said on Twitter.

Muslim is the sixth former opposition MP to have been summoned for interrogation on accusations of making public remarks critical of Emir Sheikh Sabah al-Ahmed al-Sabah.

The prosecution has also extended the detention of a former nationalist MP Mussallam al-Barrak for a day following his arrest on Monday and interrogation until late Tuesday, his lawyers said.

Barrak was accused of undermining the emir's status at a rally on October 15 when he warned against amending the disputed electoral law and also cautioned Kuwait was becoming autocratic.

In his blog on Tuesday, Jassem warned Saudi King Abdullah and the crown prince of Abu Dhabi, Sheikh Mohammed bin Zayed al-Nahayan, that protests in Kuwait could quickly trigger similar events in their countries.

He also criticized the reported support and encouragement of the two leaders to the Kuwaiti government's crackdown on its opponents.

Jassem was detained on three occasions in 2010 and 2011 for a total of more than four months for allegedly slandering the former prime minister and undermining the status of the emir through articles posted on his blog.

The latest round of political disputes in the oil-rich emirate started when the government decided to amend the electoral law in what the opposition claims is a step aimed at electing a rubber stamp parliament.

More than 100 protesters were hurt at a massive rally on October 21 organized by the opposition to demonstrate against the amendment. The opposition also plans a second protest on November 4.

Meanwhile, candidates began registering on Wednesday for a snap election called for December 1, amid boycott announcements by a majority of political groups.