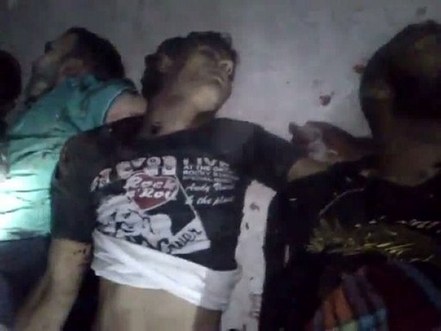 The Syrian regime has transformed a military airport in Hama city into one of the country's most-feared prisons, where detainees are crammed into hangars and deadly torture is rife, activists, watchdogs and former inmates say.

Known as the site of a 1982 uprising which was crushed amid tens of thousands of deaths by President Bashar Assad's father and predecessor Hafez, Hama has also suffered in Syria's current uprising.

Activists in Hama took part in the modern uprising that broke out in March last year but following an almost six-week siege in the summer of 2011, the army and security forces took full control of the city.

Open dissent has since been nearly impossible, with detentions carried out almost daily by the security forces, monitors and activists say.

Those detained are often sent to Hama military airport, which is not only sending warplanes on air raids but also being used as a prison by the feared Air Force Intelligence service.

"The airport is known for being the place where the worst human rights abuses of all the detention centers are committed against detainees," a Hama-based activist who identified himself as Abou Ghazi told Agence France Presse via Skype.

"Detainees are tortured wherever they are taken, whether it's a security branch or a makeshift detention center in a hospital," said Abou Ghazi.

"But the airport is terrifying. People pay bribes just to be transferred from there to other detention centers."

The Syrian Observatory for Human Rights, a watchdog that has documented rights violations in Syria since 2006, said the airport has become notorious "for the ugliest forms of torture and murder of detainees".

"After the outbreak of the Syrian revolution in March last year, the authorities began to kill demonstrators and launch a frenzied crackdown against anyone suspected of participating in the uprising," it said in a statement this week.

With so many suspected activists detained and its prisons overflowing, the regime resorted to using a range of public facilities across the country for detentions, from football stadiums to schools, activists and monitors say.

The Britain-based Observatory said it has documented at least 700 cases nationwide in which detainees have been tortured to death and many others in which torture led to permanent disability.

Hama military airport has gained the worst reputation of all among these unofficial prisons, according to Observatory director Rami Abdel Rahman.

"Thousands of prisoners, young and old, have suffered the most brutal forms of torture and murder, unchecked by any sense of morality or accountability. Since it is not an official prison, there are no records kept of detainees," he said.

"Sometimes more than 500 detainees are crammed inside one aircraft hangar, which can reach above 50 degrees Celsius (122 degrees Fahrenheit) in the summer and has led to the deaths of many people with heart disease or breathing issues."

The Observatory said the bodies of those who died were left for days among the prisoners, who had no access to toilets and were forced to defecate in the hangar.

The Observatory relies on a countrywide network of activists, lawyers and medics in civilian and military hospitals.

In an account of his time at the airport, activist Mourad al-Hamwi, who was held for 75 days from early July, described horrific conditions.

"We were 57 detainees in a dungeon only four-by-three-meters wide. When I arrived I had to squeeze myself into the forest of legs in the cell," he said in the account provided to AFP.

"The smell of blood mixed with festering mildew and sweat was suffocating. The lice, cockroaches and insects found an excellent environment there," 25-year-old Hamwi said.

The detainees ranged from preteens to elderly men, some half dressed, some naked, and all of them covered in bruises.

"One man said he was arrested because of a mix-up in names. Another told me sarcastically he was charged with possessing 'weapons'."

During his time in detention, Hamwi said at least 40 people were tortured to death.

"One of them, Jihad Saleh, had his hands bound to his feet behind his back and was left lying on his stomach without food. He starved to death in the corridor outside my cell."

Another man was being held in a cell along with his family, including four children.

"They broke his leg when he confessed he was a rebel. He choked with tears as he told me he was prepared to sacrifice one of his sons to save the rest of his family," said Hamwi.

"What is happening to Syrian detainees is hidden from the eyes and ears of the world. We have no one else but God."

There you go HA followers/defenders.....this is who HA fights alongside. And you call yourself people of God. You don't even know what God stands for. You will all rot in hell.

I think GOD means Guns Of Destruction for them, bunch of pathetic thugs.

So true bigsami. Hizbcocaine is going to feel the heat politically in the region. No one will answer the phone when Nassy calls except Mahmoud and the Ayadevil.