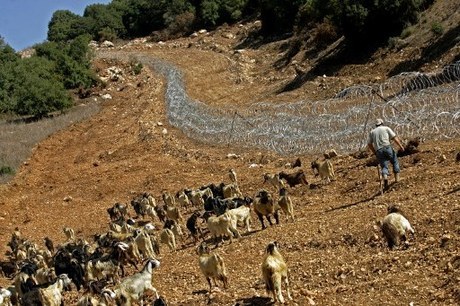 Nabaa was abducted while grazing his flock on the heights of Jabal al-Saddaneh, north of the U.N.-demarcated Blue Line, NNA said, adding that the shepherd was taken to Israel.

In the wake of the incident, the Lebanese army filed a complaint with the United Nations Interim Force in Lebanon (UNIFIL), which in turn contacted the Israeli side in a bid to secure the release of the Lebanese man, the agency added.

An Israeli force failed on July 16 to abduct two shepherds from Shebaa. After their failure, the soldiers stole some 900 goats from the area and took them to the occupied Shebaa Farms.

it's funny how no one comments these events that happen with Israel in lebanon but if the same happens between lebanon and Syria it would be a huge scandal and conferences would be made and speeches and manifestations!!! clearly Lebanese people have to read the constitution because as far as i remember in the constitution an article exists and insists that Israel is the 1st and last enemy of the Republic of Lebanon. I am not taking sides at all but let's be reasonable ! where is the civil pressure and where is the civil maturity . i'm afraid it's gone :S

Mr Solh, thanks for this constitution, Syria can do what ever it wants in Lebanon and most importantly behaves as the worst enemy of Lebanon, it will always be treated as a sister. Syria does not allow Lebanon to take its share from Nahr ElKabir nor from the Oronte even though there is an agreement supervised by the UN. Syria looted lebanon, killed its leaders, shelled its cities and we still call it sister.

Mr Solh, thanks for this constitution, Syria can do what ever it wants in Lebanon and most importantly behaves as the worst enemy of Lebanon, it will always be treated as a sister. Syria does not allow Lebanon to take its share from Nahr ElKabir nor from the Oronte even though there is an agreement supervised by the UN. Syria looted lebanon, killed its leaders, shelled its cities and we still call it sister.

Lucky bastard, he gets to travel to Israel without visa. Hez bollard terrorists will cease this opportunity to justify their terror weapons.

its a shame when things like this happen no body comments but if it happens on the border with Syria there will be a huge scandal in the country and big conferences and speeches and manifestations. I think most of the Lebanese havent read their own constitution that says in one of the main articles that Israel is the first enemy of the republic of Lebanon. i'm afraid that we are not scared of Israel nomore and dont care if Israel is still raping our sovereignty . I think the lebanese people have to educate themselves a little big about our geography and late history and compare the israeli assaults to the syrians because it has always been more severe and dangerous and they should ask themselves why is our army unable to have fair weapons isnt it because of the Zionist Lobby? that also pressures alot of politicians in lebanon? especially those who refuse buying weapons for the army from Iran and prefer america!

It was Hizb.....a rather smart one who rather defect from a group of rat dwellers hiding as always and knowing their day of reckoning is coming. Smart man!

If the syrians did this, the story would have changed by the so called resistance. Please note: neither Israel nor Syria is our friend, however, at least Israel doesn't pretend to be something it's not.

thats besides the point. this article demonstrates the need for something like hezbollah in lebanon otherwise the scale of this article would be ten times worse.

so what does HA do about the daily Syrian incursions into Lebanon? Do you need a hint?

When Lebanon wanted to increase its water pumping from the Wazzani in the limit of its internationally agreed quota, Israel refused but then with international negotiations every thing went into order. With Syria even with a UN supervised agreement, Lebanon cannot take more than 10% from Naher el Kabir and 14% from the Oronte. So maybe Israel is not our friend, but it is still a much more civilized non friend.

O so it's the shepherds fault for walking on Lebanese territory? I agree. The shepherd should always walk at least a km away from the border just so that the most sophisticated army in the region won't think he's on Israeli land. (<<<sarcasm in case ur foolish mind didn't realize it)

They only don't because ppl like u would argue that it wasn't warranted. Don't play both sides of the argument

We have had more lebanese peasants and fishermen in North Lebanon kidnapped by Syria than by Israel in the South. Does it mean we should have a Sunni militia to protect our northern border.

The only constructive solution is a strong army, no militia, no weapons but the army's and ISF's, and last but not least PEACE with all of our neighbors.

We definitely have not had "more" kidnapped in the North. Think about what you just said. But anyway, let's assume that what you said is true. Why do you attach the sectarian card to it? Stop yourself from looking at hezb as a shia org. In my opinion it is a necessary component of Lebanese society as long as the army is not strong enough. We dont make ourselves weaker before we make ourselves stronger. Hezb will disappear (through force or otherwise) when the army can indeed protect us; but only after it can, not before (otherwise we will have a defensive vacuum).