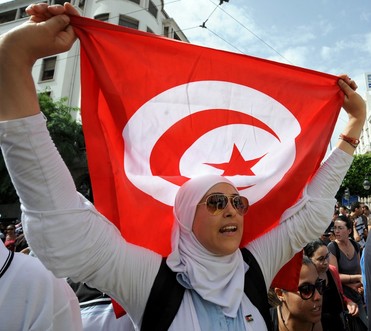 A Salafist imam has declared war on Tunisia's Islamist ruling party during a television talk show, with the interior minister countering that such talk was responsible for blood being shed.

"I am going to make war on these people because the interior minister and the leaders of Ennahda have chosen the United States as their god -- it is the Americans who are writing the laws and the new constitution," Nasreddine Aloui said in a Thursday night appearance by video link on Ettounsiya television.

He urged the country's youth to prepare their burial shrouds to fight against Ennahda, brandishing a white cloth himself, saying Ennahda and other parties want elections held on the "ruins and the bodies of the Salafist movement."

Aloui is the new imam of the Ennour mosque in the Tunis suburb of Manouba. His predecessor died on Thursday of wounds sustained when he took part in a Salafist attack on two police posts earlier this week.

Interior Minister Ali Larayedh and Human Rights Minister Samir Dilou, both members of Ennahda, were on the program and replied sharply.

"This sort of talk is partly responsible for the bloodshed. You do not realize that your words are like bullets," Larayedh said.

Dilou said: "You are not worthy to be an imam. This talk is an incitement to hatred."

Aloui's predecessor, Khaled Karaoui, died on Thursday, after being wounded when he and other militants attacked two national guard posts in Manouba following the arrest of a Salafist suspected of assaulting the head of the area's public security brigade.

During the clashes, one of the attackers was killed and two policemen wounded.

Since the Tunisian revolution that ousted veteran president Zine El Abidine Ben Ali in January 2011, radical Islamists have carried out a number of attacks, including against security forces and on cultural events.

The opposition accuses the government of failing to rein in violence by Salafists, a hardline branch of Sunni Islam.

But the authorities have vowed to crack down on Islamist violence in the wake of a Salafist-led attack on the U.S. embassy in September in which four assailants were killed.

Last month, Tunisia marked a year since its first free elections in a political climate marked by tensions within the national assembly and a stalled new constitution.

In June, voters are due to go to the polls to elect a new president and parliament.

March 14, long live democracy, especially that it gets stronger when you mix it with crazy religious fanaticism! Don't take my word for it, though. If you have doubts then all you need to do is consult with Dr. Arreet 7akeh, the staunch fighter for the cause of freedom and democracy in the Middle East, whose famous statement goes something like this: so what if the Salafis or their equally crazy Muslim Brotherhood brothers rule? Dr. Arreet 7akeh definitely emerged from the prison a better and smarter creature. gabby7, a March 14 compatriot, knows this to be a fact. But then gabby7 knows and even came up with facts that shall one day materialize.