Syria's SNC Urges Rebels be Held to Account after Executions 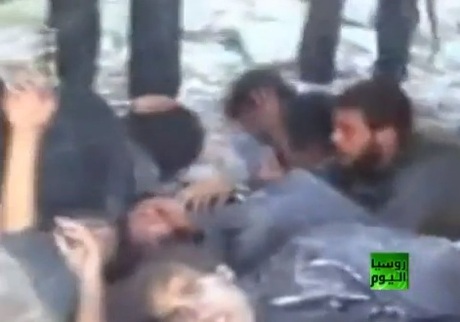 "We urge the (rebel) Free Syrian Army and the revolutionary movement on the ground to hold to account anyone who violates human rights," SNC human rights committee head Radif Mustafa told Agence France Presse by telephone.

The SNC's call came after a video posted on YouTube appeared to show about 10 soldiers being beaten, then lined up on the ground and executed with automatic rifles, after Thursday's rebel attacks on checkpoints in the northwestern town of Saraqeb.

"Though the rebel armed groups' violations are not as serious or numerous as those committed by the regime (of President Bashar Assad), we cannot be silent over such violations because that would only help them to increase," Mustafa said.

"The FSA and other armed groups need to respect human rights."

Mustafa described the situation on the ground in Syria as "very complex. There are individual cases of revenge.

"Such violations are very dangerous. Any violation damages the revolution's principles of freedom, dignity and respect for human rights."

SNC and FSA are so out touch with reality
they burn down churches(aleppo), the bomb religious shrines (damascus) and on and on,
we want Assad to hand power to this corrupt people