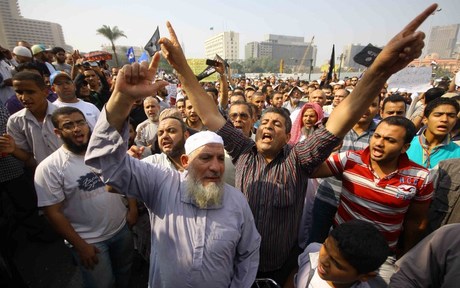 Several hundred Salafist Muslims demonstrated in the capital on Friday to demand a stronger reference to Islamic law or sharia in Egypt's new constitution, a contentious issue of rising political tension.

The size of the protest in Tahrir Square -- up to 500 people -- was limited because the main Salafist groups decided to postpone their demonstration on the issue to a later date, Agence France Presse reported.

The new constitution is to replace the 1971 charter suspended by the military which took power when president Hosni Mubarak was ousted in February last year.

Fundamentalist Islamists want the new constitution to have the precepts of sharia as the basis for legislation, a stance rejected by liberal and secular Egyptians.

Contentious topics in the drafting of the new constitution include the role of religion, the status of women and the scope of freedom of expression and faith.

Article 2 of the draft states that "Islam is the religion of the State, Arabic is its official language and the principles of Islamic sharia form the main source of legislation."

The suspended constitution limited itself to referring to sharia as the "principal source" of legislation.

Ultraconservative Islamists had asked to replace "the principles of Islamic sharia" by "the rulings of sharia" or even just "sharia."

They then wanted to include the provision that Al-Azhar institution -- Sunni Islam's main seat of learning -- be considered "the state reference for the interpretation of sharia."

A 100-member Constituent Assembly, dominated by Islamists, has been tasked with drafting the new constitution.

Egypt's powerful and once banned Muslim Brotherhood, from whose ranks President Mohamed Morsi comes, has pledged that the new constitution would make reference to sharia, but in terminology suggesting a compromise.

On October 23, an Egyptian court meant to rule on the fate of the Islamist-dominated constitutional panel instead referred the case to a superior court which has already expressed its opposition to the draft charter.

Can you imagine what a sideshow that must have been, as well as how badly it must have smelt in Tahrir square? Heard a few Salafis got beat up after being apprehended touching a Coptic woman. Takbeer

A few hundreds out of millions of Egyptians, no one wants there dark ages laws.