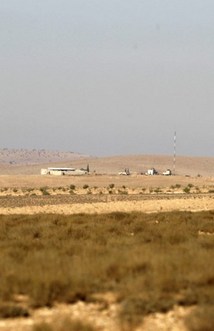 The Directorate General of Internal Security Forces on Friday announced that it is conducting the necessary investigations in order to identify those who attacked its checkpoint in the border town of Arsal and wounded 12 policemen on Thursday.

“A verbal clash erupted when the members of the checkpoint asked unidentified individuals about the name of a wounded man they were trying to transport via the Hmeid Valley in Arsal's barren mountains after he was injured in clashes in Syria,” said a statement issued by the ISF.

The aforementioned individuals were then allowed to enter Lebanon together with the wounded man due to his medical condition, the statement added.

“Shortly after this incident, around 70 men attacked the aforesaid checkpoint and beat up its members, wounding 12 of them,” the ISF said, adding that the injured policemen incurred bruises, fractures and wounds.

The attackers also “opened fire from assault rifles on the checkpoint and on a military vehicle,” according to the communique.

“The relevant ISF units are conducting the necessary investigations in coordination with Arsal's police station in order to identify the attackers, locate them and arrest them,” said the communique.

The ISF noted that investigations are taking place “under the supervision of the relevant judicial authorities.”

A security official had told Agence France Press that at 5:15 am a group of armed men drove their pick-up truck across the Syrian-Lebanese border near the town of Arsal, sparking a firefight.

One of the Syrian men died from his wounds after being injured in the clash, while another 10 men were also wounded, the official added, noting that an unspecified number of the wounded were members of the Internal Security Forces.

Lebanon's state-run National News Agency said the clash occurred after the ISF members at the Hmeid Valley checkpoint in Arsal asked the gunmen to take the authorization of the police command before transferring an injured man to a hospital in Lebanon.

But those on board the truck refused to abide by the orders of the policemen and assaulted 12 of them, NNA said.

It added that the injured Syrian man later died in hospital.

Voice of Lebanon radio (100.5) said the Lebanese army sent reinforcements to Arsal to search for supporters of municipality chief Ali al-Hujairi who had assaulted the policemen in Wadi Hmeid.

The army took measures to arrest the supporters of Hujairi after they attacked the ISF checkpoint, VDL added.

According to VDL (93.3), the policemen were injured in the fighting that pitted Arsal residents and members of the rebel Free Syrian Army against the security forces over the transfer of the injured Syrian opposition fighter to Lebanon.

Arsal residents have been aiding Syrian refugees crossing into Lebanon and the town has become an escape route for families fleeing the fighting in their country.

Several people have been killed and injured in Arsal in the past months after infiltration by Syrian troops and clashes.

There has been frequent shelling into Lebanese territory by the Syrian army amid its civil conflict, while several cross-border shoot-outs have erupted in recent months.

Syria accuses Lebanon of laxity on its borders and of allowing fighters and weapons to be smuggled into the strife-torn country.

"Syria accuses Lebanon of laxity on its borders and of allowing fighters and weapons to be smuggled into the strife-torn country." we'll isn't that pay back time? Cunts!

The FSA will be soon controlling Lebanon.