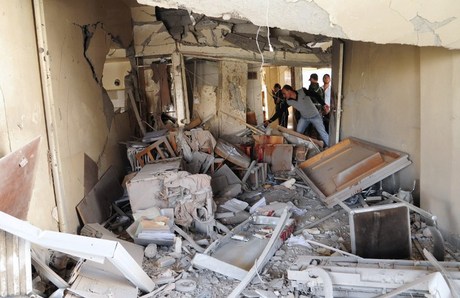 An explosion shook the area near the Dama Rose hotel in the heart of the Syrian capital on Sunday, wounding 11 civilians, state media reported.

"An explosion caused by terrorists went off near to the Dama Rose hotel and the union federation, which left a number of people wounded and causing damage to the area," Syrian TV said, using the regime's term for armed rebels.

The Dama Rose hotel hosted U.N.-Arab League envoy Lakhdar Brahimi during his visits to Damascus. The office of the Ombudsman, headed by diplomat Mokhtar Lamani, is also located there.

The Local Coordination Committees, a network of activists on the ground, also reported plumes of smoke rising near Ommayad Square after a "powerful explosion" rocked the area close to the hotel.

On September 26, twin blasts blamed on suicide bombers targeted the military headquarters, killing four guards. They were followed by a fierce firefight between troops and rebels.

Justice for our beloved Lebanon..