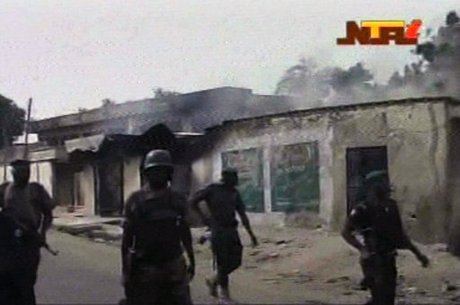 Gunmen with explosives attacked a police station, a primary school and two cellphone towers in a town in Nigeria's restive northeast early Sunday and set them ablaze, the military and residents said.

"We heard that there were some attacks in Fika by suspected Boko Haram terrorists. They attacked two telecommunication masts, a police station and a primary school," Lazarus Eli, military spokesman in Yobe State, told Agence France Presse.

A resident said he had seen the bodies of two policemen being brought out of the razed police station, but Eli said he could not immediately confirm whether there were casualties.

Eli said troops had deployed to the town to contain the violence. Fika is located some 170 kilometers (110 miles) from Damaturu, the capital of Yobe State and a hotbed of Islamist extremist group Boko Haram.

Residents said the gunmen attacked their targets with explosives at around 4:30 am.

"They threw explosives and fired gunshots at their targets, setting them ablaze, and fled after the attack," Tanimu Mani told AFP.

"Soldiers who arrived in the town went inside the burnt police station and brought out the bodies of two policemen killed in the attack," he said.

Another resident, Hassan Gaji, a student, said he had heard blasts and gunshots during his early morning prayers.

"They were shooting seriously for about one hour," he said, adding that the town had been taken over by police and soldiers.

Violence linked to the Boko Haram insurgency is believed to have left more than 2,800 people dead since 2009, including killings by the security forces.

Nigeria, Africa's most populous nation and largest oil producer, is divided between a mainly Muslim north and predominantly Christian south.