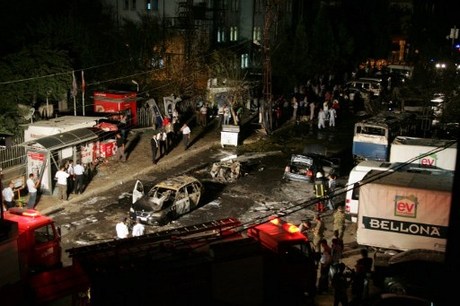 A car exploded on Sunday in a town in Turkey's Kurdish-majority southeast, killing an 11-year-old child and wounding 18 others, in an attack blamed on Kurdish rebels, officials and security sources said.

Erdogan strongly condemned the attack which he said was carried out by the "terrorist organization," referring to the banned Kurdistan Workers' Party (PKK).

The blast which shattered windows of the nearby shops occurred in the Semdinli town of Hakkari province bordering Iraq and Iran, as an armored police vehicle passed by, said security sources.

Kurdish rebels have carried out similar attacks on security targets in the past.

Semdinli is the scene of frequent clashes between Turkish security forces and PKK members.

On Thursday, another car exploded outside a military barracks in a southern Turkey town near Syria, lightly injuring four people, in an attack blamed on Kurdish rebels.

About 45,000 people have been killed since the PKK, listed as a terrorist organization by Turkey and much of the international community, took up arms for autonomy in Kurdish-majority southeastern Turkey in 1984.

This is the work of Bashar telling the Kurds to cause trouble. The Kurds should be careful.

Bombs in Turkey+Bombs in Lebanon+send drones to Israel, let's destabilize the region and kill them all if Bashar is suffering.